In the figure which follows each dot represents a game of a particular sport. 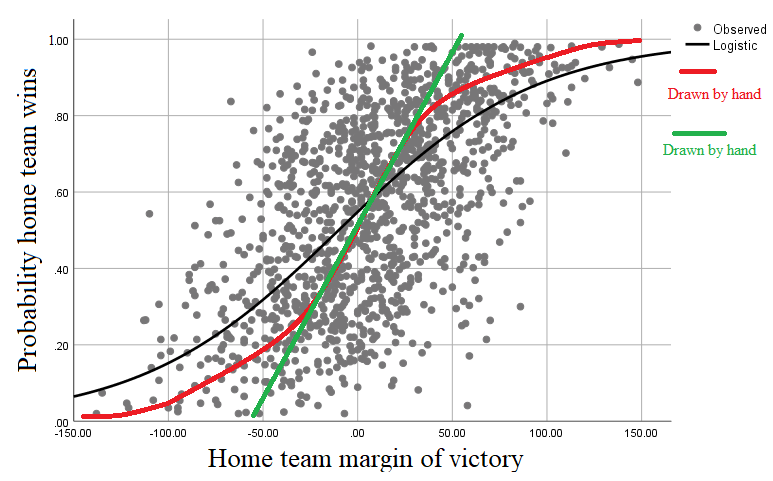 The y-axis represents the home team's pre-game probability of victory, as judged by their bookmaker odds before the game started (or rather by a model applied to the those bookmaker odds).

The black curve looks vaguely plausible but there are some things that bother me about it.

In red I've drawn by hand what I regard as a more appropriate curve. I also wondered whether curve fitting was appropriate in the first place, given my goal of generating a par score for a team with a given win probability. I also drew a straight line in green. Again, it was done just from intuition but it seems like it would approximate simple regression line if we used probability to predict margin of victory.

I realize that given I have fairly strong preconceptions about where the curve should be, it might be asked why I don't make my own curve without any consideration of these data points. Indeed, it seems to me that many people doing this sort of modelling do ignore all empirical data and do just that. However, I am hoping to find some compromise between prior beliefs and the data.

My question is what I should do differently to obtain a curve that indicates a reasonable 'par' score for a team with a given probability of victory. As Glen_b notes here, there are many other sorts of curves that 'level off' and I picked logistic purely because it was an option in SPSS. I'm not wedded to doing this in SPSS and could use MATLAB or R instead if it was more appropriate.

Your hand-drawn line appears to be roughly attempting to "go through the middle" of the data, and is thus roughly minimising some aggregate of the orthogonal residuals between the points and the curve. This is similar to formal fitting methods like total least squares. In contrast, the line generated for the logistic curve is based on the more orthodox approach of minimising some aggregate of the vertical error between the points and the curve. If you would like a curve that is more like the one you have drawn then you should use a fitting procedure based on orthogonal residuals. There are some discussions of the distinction between fitting methods using orthogonal residuals and vertical residuals here, here and here.

In answer to your posted question, yes, it is possible to fit a curve that incorporates prior beliefs about the resltionship between the variables. This is generally done by postulating a Bayesian model with a curve described by some parameters, and setting a prior for those parameters. However, I don't think that is what you need here. Your "prior" belief has clearly been formed from seeing the data, and its divergence from the formal fitted model you have used is essentially due to your visual sense that you should be minimising orthogonal residuals rather than vertical residuals. What you need to do here is consider if that is really what you want. If so, then you should move to a fitting method that uses orthogonal residuals. If not, you have learned an important deficiency of your visual intuition!

Not the answer you're looking for? Browse other questions tagged nonlinear-regression curve-fitting or ask your own question.