Including time of day in a linear regression model

The title may be entirely inappropriate for this question: that depends on whether I am on the right track. I am developing a statistical model to evaluate flower temperature based on air temperature. I'm not very good at anything statistics related, but I'm decent in programming in Python so I was thinking of building a linear regression in there.

However, I have difficulties figuring out how to build my regression and whether even a linear regression is a good choice at all.

The following plot shows how temperature and flower data varies with the time (Month-day Hour).

The coloured lines = various flowers whose temperatures were measured.

Perhaps important, but I can't figure out how to make use of them: the arrows at the top show the wind and direction, while the blue line shows the incident solar radiation. 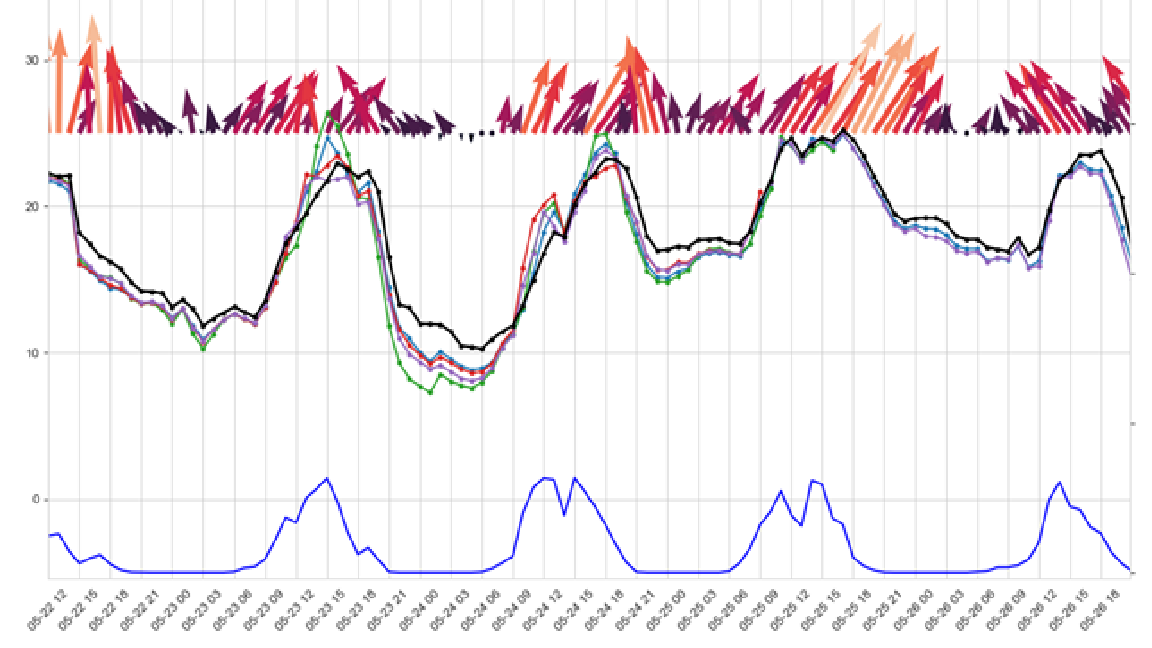 After reading this post: Is time of the day (predictor in regression) a categorical or a continuous variable?, I thought maybe that using a categorical approach would work, but I am getting from this is that I would have 24 different equations for each hour of the day, which seems a bit much. I suppose that I am prepared to attempt such an approach, but I was hoping to get some advice before pressing on?

Perhaps I should simply use solar radiation instead of the time? But even then, the shape is periodic and I have no idea how to integrate a periodic component within a linear regression!

where FT_h is the flower temperature for the chosen flower at hour h, AT_h is the air temperature at hour h, m() is a smooth, unknown function meant to capture the temporal cycles you see in the temperature data and epsilon_h is an unknown error term. Here, h = 1, 2, 3, ..., H is an index which counts how many hours you have represented in total in your flower data. In other words, this index counts your hours from the first to the last. If you have 9,000 hours represented in your data, for example, then H = 9,000. In this model, beta1 represents the hourly effect of air temperature on flower temperature, after controlling for temporal effects.

The model can be expanded by adding a linear effect for incident solar radiation (ISR):

The challenging aspects of these models are:

Many years ago, I conducted research on this very topic - see, for example - http://www.ghement.ca/217.pdf. However, I have not stayed current on the topic so it's possible there have been several advances on ways to handle item 1.

Intuitively, the temporal signal seen in the data is really strong while the air temperature signal is likely tiny by comparison. So you need to find the right balance when determining the degree of smoothness of the temporal effect, so as not to throw the baby with the bath water.

If you are interested in comparing effects of air temperature across flowers, you can expand the model even further. But I would start small to make sure I get a handle first on the simpler, flower-specific models.

Not the answer you're looking for? Browse other questions tagged regression categorical-data python circular-statistics or ask your own question.

4
Is time of the day (predictor in regression) a categorical or a continuous variable?
4
Regression using circular variable (hour from 0~23) as predictor

1
Time-varying linear regression
13
A regression model whose response variable is the day of year that an annual event (usually) occurs
3
Linear regression parameters that vary with periodic time
3
Measure of central tendency for periodic variable (hour of day)
2
Methods to compare and analyze two columns in a dataset
1
How can I compare the slopes of two polynomial regressions from different dataset in R?
0
What is the right method to estimate rate of change in daily values over a period of time?
2
Linear regression with hour of day variable
2
Interpretation of coefficients in mixed-effects model with circular response?