The head of my data table looks like this:

The full data is viewable here, and there are 1033 games in total for which I've collected this data.

In the second tab of that spreadsheet I have deleted all rows in which the odds the bookmaker was offered were unequal for each side of the Over/Under line. The head of that data table looks like this:

A graph of the 318 games with equal odds is displayed below. The Pearson correlation between the Over/Under Score and the actual total score is 0.3934. 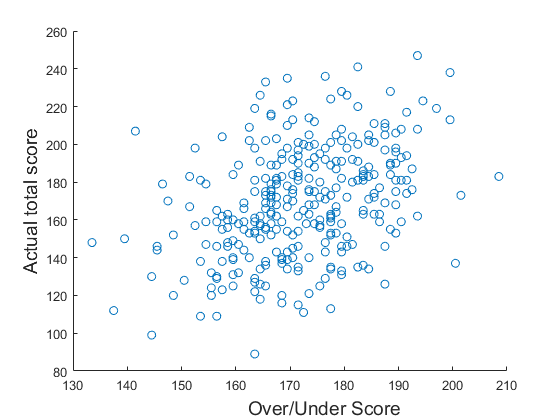 Ultimately I want to use the odds and the Total Over/Under score (both provided by the bookmaker) to a "best guess" about what the total score will be. Reflecting a bit on that, it seemed I'd need to

It seems a rather simple research scenario, but I'm unsure of how to proceed, and googling this site didn't reveal any similar-seeming scenarios.