I am reading about a method called consistent hash designed to distribute load among servers. The best case scenario would be a discrete uniform distribution where each server would get the same amount of requests.

In a specific implementation I am considering using there is a table of describing the chi squared and p-values test results: 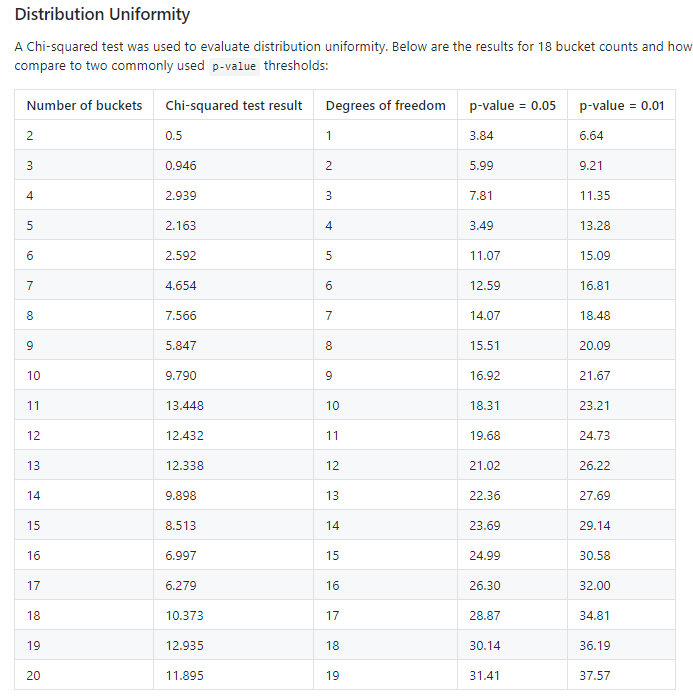 I am having difficulties understanding how to interpret the results: From what I understand a Chi square test tests a null hypothesis and that the p value is the probability that we would accept the null hypothesis even if it is wrong.

What I don't understand is how to interpret a row in the results table. How do I associate the chi-squared test results and the value in the p-value[0.05/0.01] values to the probability that the distribution is not uniform ?

They're showing that the distribution of load is statistically indistinguishable from the uniform distribution, by (I'm guessing) partitioning the servers into 2 through 18 sets and conducting a chi-squared goodness of fit test, comparing the observed requests for each bucket with expected requests.

A $ \chi^2$ test comes up anytime you have a test-statistic that follows the $\chi^2$ distribution, i.e. the statistic is the sum of squared standard normal random variables.

One classic such situation is the chi-squared goodness of fit test of whether an observed sample came from a particular distribution.

We used to use tables of p-value thresholds like this before we all had computers that could tell us the precise p-value.

Not the answer you're looking for? Browse other questions tagged hypothesis-testing distributions chi-squared-test p-value uniform-distribution or ask your own question.