Why is the quadratic approximation to the relative likelihood positive?

We can approximate the log likelihood at the real parameter value $l(\theta)$ with the MLE estimate $l(\hat\theta)$ using second order Taylor polynomials, like so:

where $I(\hat\theta)$ is the observed Fisher information. It is always positive, as is the square term that follows. This implies that this difference in logs is negative. How can that be? This says that the log likelihood is higher under the MLE estimate than the true parameter value - shouldn't the truth be the highest attainable likelihood?

No. Keep in mind that the likelihood function you're dealing with will be different for every sample. The highest attainable likelihood (under some model) is the one you get when you maximize it for a given sample; the truth should be near that identified maximum* but with continuous parameters it will never be greater and will (almost) always be smaller. (If it were ever greater it means you didn't maximize the likelihood!)

* at least in value of the log-likelihood (and in sufficiently nice cases, in argument)

Consider a specific example. Let's generate a set of data from a normal distribution with mean 20 and standard deviation 3 (n=7 observations):

for simplicity, let's also assume we know $\sigma=3$, and look at the likelihood as a function of $\mu$.

The log likelihood will be maximized at $\mu=\bar{x}$ not at $\mu=20$; that's because $\bar{x}$ minimizes the sums of squared deviations from the observations you have, so it maximizes the likelihood for those data. 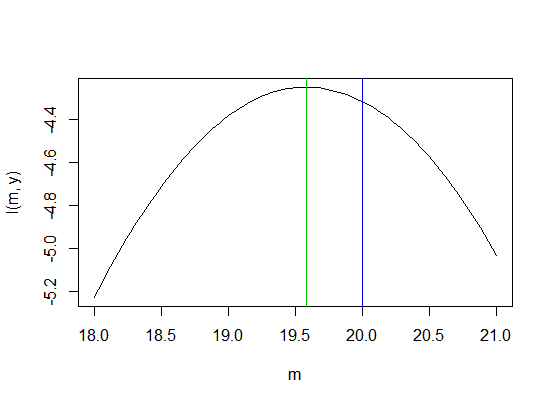 Not the answer you're looking for? Browse other questions tagged mathematical-statistics maximum-likelihood inference or ask your own question.

19
What are the disadvantages of the profile likelihood?
2
Estimate the variance of MLE
5
Connection between MLE (Maximum Likelihood Estimation) and introductory Inferential Statistics?
2
Proving that the average of a log-likelihood ratio involving an ML estimator is positive
4
Is the Quadratic Approximation of Log-Likelihood Equivalent to the Normal Approximation of the MLE?
9
Why does the Bayesian posterior concentrate around the minimiser of KL divergence?
5
How is it possible for both the likelihood and log-likelihood to be asymptotically normal?