Why L1 regularization can "zero out the weights" and therefore leads to sparse models? [duplicate]

I'm aware there is a very relevant explanation on L1 regularization's effect on feature selection at here: Why L1 norm for sparse models [Ref. 1].

To better understand it I'm reading Google's tutorial on Regularization for Sparsity: L₁ Regularization [Ref. 2]. When it comes to the following part, there's some statements I emphasized that I do not understand:

You can think of the derivative of L1 as a force that subtracts some constant from the weight every time. However, thanks to absolute values, L1 has a discontinuity at 0, which causes subtraction results that cross 0 to become zeroed out. For example, if subtraction would have forced a weight from +0.1 to -0.2, L1 will set the weight to exactly 0. Eureka, L1 zeroed out the weight.

I imagine when it says "L1 has a discontinuity at 0" it means the loss of the L1 like in the following figure [Ref. 1]: 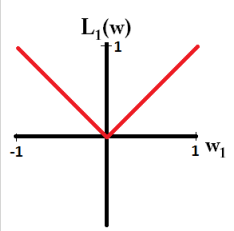 But why it will "cause subtraction results that cross 0 to become zeroed out"? Why "if subtraction would have forced a weight from +0.1 to -0.2, L1 will set the weight to exactly 0"?

Consider their metaphor whereby L1 regularization is "a force that subtracts some constant from the weight every time".

So, consider that every time step, the position $x$ (weight or whatever you're regularizing) experiences a force that applies a total acceleration over that time step of $-k\, \textrm{sgn}(x)$.

Suppose $x$ is smaller than $k$. It seems like applying the force would make $x$ overshoot zero. However, if you subdivide the time step into smaller time steps and $k$ into smaller total accelerations (since the force is integrated over smaller periods), in the limit of subdivision $x$ simply goes to zero.

If this were the L2 norm, you could ask the same question about overshooting. Only now there is a simple physical metaphor: an overdamped pendulum (in mud), which does not overshoot.

Not the answer you're looking for? Browse other questions tagged machine-learning lasso regularization overfitting ridge-regression or ask your own question.

116
Why does the Lasso provide Variable Selection?
7
Graphical interpretation of LASSO
143
Why L1 norm for sparse models
1
Does L1 regularization (Lasso) always leads to feature reduction?

143
Why L1 norm for sparse models
5
How to use cross-validation with regularization?
31
Why do smaller weights result in simpler models in regularization?
3
double feature value in ridge regression, coefficients change?
55
Why do we only see $L_1$ and $L_2$ regularization but not other norms?
10
Understanding Lasso Regression's sparsity geometrically
1
Why don't I see a minimum in out-of-sample mean squared error along my lasso path?
3
Are there any mathematical reasons that describe why "sparse models" are desirable?