Does a uniform distribution of many p-values give statistical evidence that H0 is true?

But let's assume you have the possibility to do the statistical test many times because you have many datasets, all independent of each other. All datasets are the result of the same process and you want to make some statement (H0/H1) over the process itself and aren't interested in the results of each single test. You then collect all the resulting p-values and happen to see via histogram plot that the p-values are clearly uniformly distributed.

My reasoning now is that this can only happen if H0 is true — else the p-values would be distributed differently. Is this therefore enough evidence to conclude that H0 is true? Or am i missing here something essential, because it took me a lot of willpower to write "conclude that H0 is true" which just sounds horribly wrong in my head.

I like your question, but unfortunately my answer is NO, it doesn't prove $H_0$. The reason is very simple. How would do you know that the distribution of p-values is uniform? You would probably have to run a test for uniformity which will return you its own p-value, and you end up with the same kind of inference question that you were trying to avoid, only one step farther. Instead of looking at p-value of the original $H_0$, now you look at a p-value of another $H'_0$ about the uniformity of distribution of original p-values.

Here's the demonstration. I generate 100 samples of 100 observations from Gaussian and Poisson distribution, then obtain 100 p-values for normality test of each sample. So, the premise of the question is that if the p-values are from uniform distribution, then it proves that the null hypothesis is correct, which is a stronger statement than a usual "fails to reject" in statistical inference. The trouble is that "the p-values are from uniform" is a hypothesis itself, which you have to somehow test.

In the picture (first row) below I'm showing the histograms of p-values from a normality test for the Guassian and Poisson sample, and you can see that it's hard to say whether one is more uniform than the other. That was my main point.

The second row shows one of the samples from each distribution. The samples are relatively small, so you can't have too many bins indeed. Actually, this particular Gaussian sample doesn't look that much Gaussian at all on the histogram.

In the third row, I'm showing the combined samples of 10,000 observations for each distribution on a histogram. Here, you can have more bins, and the shapes are more obvious.

Finally, I run the same normality test and get p-values for the combined samples and it rejects normality for Poisson, while failing to reject for Gaussian. The p-values are: [0.45348631] [0.] 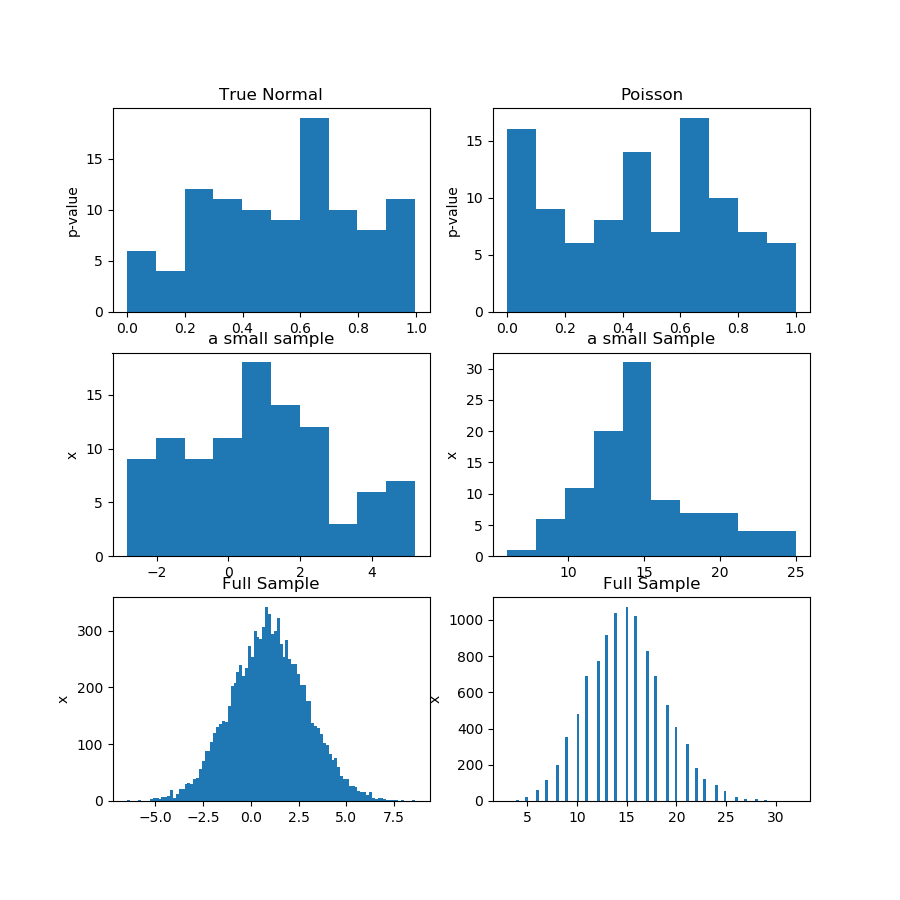 This is not a proof, of course, but the demonstration of the idea that you better run the same test on the combined sample, instead of trying to analyze the distribution of p-values from subsamples.

Your series of experiments can be viewed as a single experiment with far more data, and as we know, more data is advantageous (eg. typically standard errors decrease as $\sqrt{n}$ increases for independent data). But you ask, "Is this ... enough evidence to conclude that H0 is true?"

No. A basic problem is that another theory may produce similar patterns in data! As @Björn discusses in his answer, you will fail to reject a false $H_0$ if your experiment lacks power to distinguish $H_0$ from other possibilities. For centuries, we failed to reject Newton's theory of gravity because no one had conducted the types of tests where Newton's theory gives sufficiently different predictions than Einstein's theory of general relativity. Less extreme examples are commonplace.

David Hume and the problem of induction

Perhaps a rephrasing is, "If I obtain more and more data consistent with $H_0$ being true, can I ever conclude that $H_0$ is true?"

That question is deeply related to 18th century philosopher David Hume's problem of induction. If all observed instances of A have been B, can we say that the next instance of A will be B? Hume famously said no, that we cannot logically deduce that "all A are B" even from voluminous data. In more modern math, a finite set of observations cannot logically entail $\forall_{a \in A} \left[ a \in B \right]$ if A is not a finite set. Two notable examples as discussed by Magee and Passermore:

If Hume's conclusion is correct, proving $H_0$ true is unachievable. That we cannot make statements with certitude though is not equivalent to saying we know nothing at all. Experimental science and statistics have been successful in helping us understand and navigate the world.

An (incomplete) listing of ways forward:

Popper's view has been immensely influential, but as Kuhn and others have argued, it does not quite conform to the empirically observed practice of successful science.

To the frequentist statistician, parameter $\theta$ is a scalar value, a number. If you instead take a subjective Bayesian viewpoint (such as in Leonard Jimmie Savage's Foundation of Statistics), you can model your own uncertainty over $\theta$ using the tools of probability. To the subjective Bayesian, $\theta$ is a random variable and you have some prior $P(\theta)$. You can then talk about the subjective probability $P(\theta \mid X)$ of different values of $\theta$ given the data $X$. How you behave in various situations has some correspondence to these subjective probabilities.

This is a logical way to model your own subjective beliefs, but it's not a magic way to produce probabilities that are true in terms of correspondence to reality. A tricky question for any Bayesian interpretation is where do priors come from? Also, what if the model is misspecified?

A famous aphorism of George E.P. Box is that "all models are false, but some are useful."

Newton's law may not be true, but it's still useful for many problems. Box's view is quite important in the modern big data context where studies are so overpowered that you can reject basically any meaningful proposition. Strictly true versus false is a bad question: what matters is whether a model helps you understand the data.

There's a world of difference in statistics between estimating a parameter $\theta \approx 0$ with a small standard error versus with a large standard error! Don't walk away thinking that because certitude is impossible, passing rigorous scrutiny is irrelevant.

How far you can go beyond narrow statistical interpretations is a difficult question.

In a sense you are right (see the p-curve) with some small caveats:

With realistic applications, you tend to get additional issues. These mostly arise, because no one person/lab/study group can usually do all the necessary studies. As a result one tends to look at studies from lots of groups, at which point you have increased concerns (i.e. if you had done all relevant experiments yourself, at least you'd know) of underreporting, selective reporting of significant/surprising findings, p-hacking, multiple testing/multiple testing corrections and so on.

Null hypothesis (H0): Gravity causes everything in the universe to fall toward Earth's surface.

Alternate hypothesis (H1): Nothing ever falls.

Performed 1 million experiments with dozens of household objects, fail to reject H0 with $p < 0.01$ every time. Is H0 true?

Not the answer you're looking for? Browse other questions tagged hypothesis-testing p-value combining-p-values or ask your own question.

10
How do you know something isn't random?
7
Test for significant excess of significant p-values across multiple comparisons