Regression and causality in econometrics

For a proper handling of causality in statistical model the best way probably is to use Structural Causal Model as explained, for example (shortly), in: Trygve Haavelmo and the Emergence of Causal Calculus – Pearl 2012 feb.

However, currently, these are not the standard method in basics econometrics model (classic multiple linear regression). Indeed is frequently used the concept of “true model” or “data generating process” that sometime have explicit causal meaning. In any case I want to consider only causal sense. Therefore if we estimate the sample counterpart of “true model” we achieve causal interpretation about parameters.

Keeping in mind the above consideration, my attempt is to grasp

Can you explain me something about these two point in the simplest as possible scenario?

In the context of the Pearl paper you've given, what most econometricians would call a true model is input I-1 to the Structural Causal Model: a set of assumptions $A$ and a model $M_A$ that encodes these assumptions, written as a system of structural equations (as in Models 1 and 2) and a list of statistical assumptions relating the variables. In general, the true model need not be recursive, so the corresponding graph can have cycles.

What's the connection between a true model and a randomized experiment? Suppose an econometrician wants to estimate $\rho$. Just observing $(s_i, y_i)$ for a bunch of individuals isn't sufficient. This is identical to Pearl's point about statistical conditioning. Here $$ E[y_{si} \mid s_i = s_0] = E[f_i(s_0) \mid s_i = s_0] = \alpha + \rho s_0 + E[\eta_i \mid s_i = s_0]. $$ As Angrist and Pischke point out, $\eta_i$ may be correlated with $s_i$ in observational data, due to selection bias: an individual's decision about schooling might depend on her value of $\eta_i$.

With additional assumptions and data, there are other ways to correct for the correlation. A randomized experiment is only considered the "best" because we may not believe the other assumptions. For example, with the Conditional Independence Assumption and additional data, we could estimate $\rho$ by OLS; or we could bring in instrumental variables.

Edit 2 (CIA): This is mainly a philosophical point, and Angrist and Pischke may disagree with my presentation here. The Conditional Independence Assumption (selection on observables) lets us correct for selection bias. It adds an assumption about joint distributions: that $$ f_i(s) \perp\!\!\!\perp s_i \mid X_i $$ for all $s$. Using just conditional expectation algebra (see the derivation in Angrist and Pischke) it follows that we can write $$ y_i = f_i(s_i) = \alpha + \rho s_i + X_i' \gamma + v_i $$ with $E[v_i \mid X_i, s_i] = 0$. This equation allows us to estimate $\rho$ in the data using OLS.

Neither randomization nor the CIA goes into the system of equations that defines the true model. They are statistical assumptions that give us ways to estimate parameters of a model we've already defined, using the data we have. Econometricians wouldn't typically consider the CIA part of the true model, but Pearl would include it in $A$.

If you could perform a randomized control experiment, you would take many days, suppose 100 days, and on each of these days randomly assign the level of sales of ice cream. Key to this randomization, given the causal structure depicted in the graph below, is that the assignment of the level of ice cream sales is independent of the level of temperature. If such a hypothetical experiment could be performed you should find that on the days when the sales were randomly assigned to be high, the average crime rate is not statistically different than on days when the sales were assigned to be low. If you had your hands on such data, you'd be all set. Most of us, however, have to work with observational data, where randomization did not do the magic it did in the above example. Crucially, in observational data, we do not know whether the level of Ice Cream Sales was determined independently of Temperature or whether it depends on temperature. As a result, we'd have to somehow untangle the causal effect from the merely correlative.

Pearl's claim is that statistics doesn't have a way of representing E[Y|We Set X to equal a particular value], as opposed to E[Y|Conditioning on the values of X as given by the joint distribution of X and Y]. This is why he uses the notation E[Y|do(X=x)] to refer to the expectation of Y, when we intervene on X and set its value equal to x, as opposed to E[Y|X=x], which refers to conditioning on the value of X, and taking it as given.

What exactly does it mean to intervene on variable X or to set X equal to a particular value? And how is it different than conditioning on the value of X? 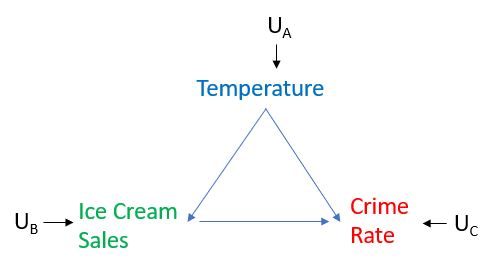 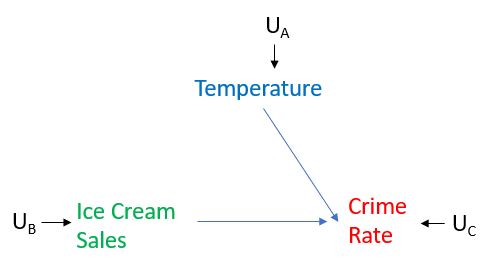 I will just mention that one Pearl's greatest contributions, in my opinion, is the concept of colliders and how conditioning on colliders will cause independent variables to be likely dependent.

Pearl would call a model with causal coefficients (direct effect) as given by E[Y|do(X=x)] the structural causal model. And regressions in which the coefficients are given by E[Y|X] is what he says authors mistakenly call "true model", mistakenly that is, when they are looking to estimate the causal effect of X on Y and not merely to forecast Y.

So, what's the link between the structural models and what we can do empirically? Suppose you wanted to understand the causal effect of variable A on variable B. Pearl suggests 2 ways to do so: Backdoor criterion and Front-door criterion. I will expand on the former.

Backdoor Criterion: First, you need to correctly map out all the causes of each variable and using the Backdoor criterion identify the set of variables that you'd need to condition on (and just as importantly the set of variables you need to make sure you do not condition on - i.e. colliders) in order to isolate the causal effect of A on B. As Pearl points out, this is testable. You can test whether or not you've correctly mapped out the causal model. In practice, this is easier said than done and in my opinion the biggest challenge with Pearl's Backdoor criterion. Second, run the regression, as usual. Now you know what to condition on. The coefficients you'll get would be the direct effects, as mapped out in your causal map. Note that this approach is fundamentally different from the traditional approach used in estimating causality in econometrics - Instrumental Variable regressions.

The use of ‘causal’ in such regression/correlation based approaches is misleading, in my opinion. Path analysis, structural equation modeling, Granger causality, etc attempts to license causal inferences by imposing some fairly tenuous assumptions. In the case of Structural equation modeling for instance, the paths are directional and A appears to ‘cause’ B, but this simply means that the model as structured is ‘plausible’ in that it reproduces an observed covariance matrix (in fact, the direction of the paths don’t even matter much - just the constraints).

Not the answer you're looking for? Browse other questions tagged regression experiment-design causality or ask your own question.

101
Under what conditions does correlation imply causation?
33
Under which assumptions a regression can be interpreted causally?
26
Paradox in model selection (AIC, BIC, to explain or to predict?)
20
Minimizing bias in explanatory modeling, why? (Galit Shmueli's "To Explain or to Predict")
8
What is a 'true' model?
6
Regression in Causal Inference
6
Does correlation correlate with causation?
4
Structural models and relationship (statistical associations)
2
endogenous regressor and correlation
2
In regression analysis, data generate model or model generate data?
See more linked questions

24
What are the main differences between Granger's and Pearl's causality frameworks?
5
regression and causation
2
non stochastic regressors and causation
2
non stochastic regressors
6
Causality: Structural Causal Model and DAG
15
How would econometricians answer the objections and recommendations raised by Chen and Pearl (2013)?
1
Monty Hall problem and causality
1
Econometrics meaning of structural versus regression model