Computation and Interpretation of Odds Ratio with continuous variables with interaction, in a binary logistic regression model

A binary logistic regression model has been fitted, with the following output;

How would one give and interpret the odds ratios for one of $A$ or $B$ here?

As the variables are continuous it also seems more confusing, if $B$ was been a binary value then could interpret the model as

How to go about computation and interpretation of odds ratios in the case of interaction with continuous variables?

Why I don't think this is a duplicate

From exp (coefficients) to Odds Ratio and their interpretation in Logistic Regression with factors , talks about using categorical variables and has only one factor with three levels (red, orange, blue)

Interaction Test with Odds Ratio didn't talk about a similar scenario to my question.

Comparing odds ratios of continuous and discrete variables is discussing their design.

Interpretation of continuous by continuous interaction in binary regression model doesn't have an answer, in the comments there are links to this post and this post, neither of which appear to answer the question, or mine.

Odds ratios for continuous independent variables [duplicate] has been flagged as a duplicate, although the post that has been linked ( this post ) doesn't appear to answer the problem as it's talking about categorical variables ( I have mentioned this post already, red, orange, blue).

In the last thread linked above whuber has stated the information is already there, I feel that it would be a good idea to have an explicit answer in relation to the example that I have provided as the topic seems to be confusing to other learners as well as myself.

As others have noted, it is probably easier to interpret this graphically. I will make certain assumptions to demonstrate the thought process for interpreting interactions like this:

So you find that the odds ratio of $A$ drops as the value of $B$ increases. We can also graph the set-up at varying values of B: 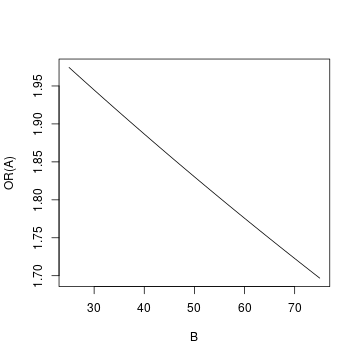 If your predictors A and B are both continuous and they interact in their effect, then your binary logistic regression model is:

Assume you are now interested in the effect of A on the (conditional) log odds of "success"; because A and B interact, the effect of A depends on the (effect of) B and you can determine it by re-expressing the above model like this:

Thus, via exponentiation of the coefficient of A in the above model re-expression, you can determine that a 1-unit increase in the value of A changes the odds of "success" by a multiplicative factor of $exp(\beta_1 + \beta_3 B)$.

You can give B certain values to see more explicitly how this multiplicative factor describing the effect of A on the odds of success gets affected by the values of B - for example, consider values for B such as mean(B) - sd(B), mean(B), mean(B) + sd(B) if the distribution of B is roughly symmetric and unimodal.

A similar argument as described above can be used to quantify the effect of B on the odds of success as a function of (the effect of) A.

It is not easy to put this into words or to visualise it but let us attempt the task. 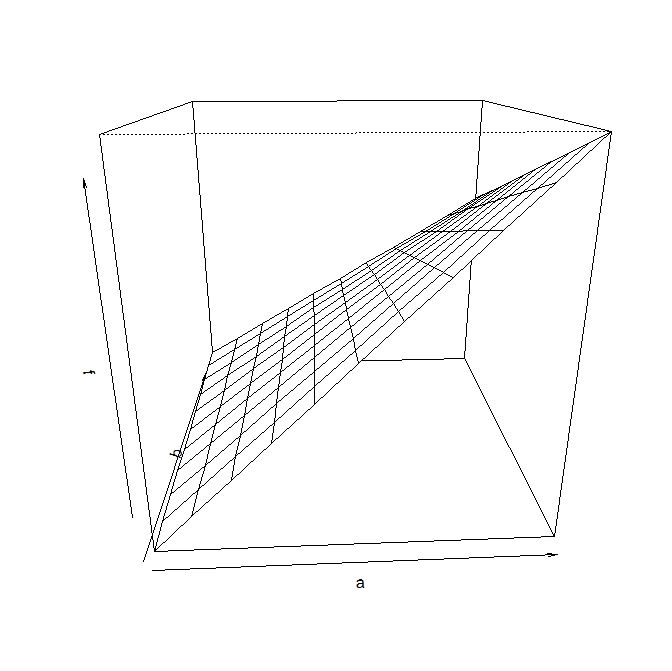 The perspective plot shows the value of the equation specified in terms of the logit for values of $A$ and $B$ from 0 to 100 (denoted f, a and b in the plot). Note the very slight inclination in both directions corresponding to the small interaction effect. Despite the apparent curvature this is just an optical effect the surface is flat.

I would speculate that the reason we see so few linear by linear interactions in my field is because they are so hard to understand and explain to the readers.