Did Karl Pearson plot thousands of these relationships before forming this conclusion, or is there a logical line of reasoning behind this relationship?

Denote $\mu$ the mean ($\neq$ average), $m$ the median, $\sigma$ the standard deviation and $M$ the mode. Finally, let $X$ be the sample, a realization of a continuous unimodal distribution $F$ for which the first two moments exist.

It's well known that

This is a frequent textbook exercise:

Even though it is in general not true (Abadir, 2005) that any unimodal distribution must satisfy either one of $$M\leq m\leq\mu\textit{ or }M\geq m\geq \mu$$ it can still be shown that the inequality

holds for any unimodal, square integrable distribution (regardless of skew). This is proven formally in Johnson and Rogers (1951) though the proof depends on many auxiliary lemmas that are hard to fit here. Go see the original paper.

then $\mu\leq m\leq M$. Furthermore, if $\mu\neq m$, then the inequality is strict. The Pearson Type I to XII distributions are one example of family of distributions satisfying $(4)$ [4] (for example, the Weibull is one common distribution for which $(4)$ does not hold, see [5]).

The paper chl points to gives some important information -- showing that it's not close to a general rule (even for continuous, smooth, "nicely behaved" variables, like the Weibull). So while it may often be approximately true, it's frequently not.

So where is Pearson coming from? How did he arrive at this approximation?

Fortunately, Pearson pretty much tells us the answer himself.

The first use of the term "skew" in the sense we're using it seems to be Pearson, 1895 [1] (it appears right in the title). This paper also appears to be where he introduces the term mode (footnote, p345):

I have found it convenient to use the term mode for the abscissa corresponding to the ordinate of maximum frequency. The the "mean," the "mode," and the "median" have all distinct characters important to the statistician.

It also appears to be his first real detailing of of his system of frequency curves.

So in discussing estimation of the shape parameter in the Pearson Type III distribution (what we'd now call a shifted - and possibly flipped - gamma), he says (p375):

The mean, the median, and the mode or maximum-ordinate are marked by bb, cc and aa, respectively, and as soon as the curves were drawn, a remarkable relation manifested itself between the position of the three quantities: the median, so long as $p$ was positive* was seen to be about one-third from the mean towards the maximum$^\dagger$

* this corresponds to the gamma having shape parameter $>1$

$\dagger$ here the intent of "maximum" is the $x$-value of the maximum frequency (the mode), as is clear from the beginning of the quote, not the maximum of the random variable.

And indeed, if we look at the ratio of (mean-mode) to (mean-median) for the gamma distribution, we observe this: 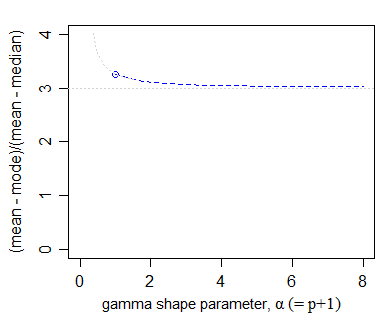 (The blue part marks the region Pearson says that the approximation is reasonable).

Indeed, if we look at some other distributions in the Pearson system - say the beta distributions, for example - the same ratio approximately holds as long as $\alpha$ and $\beta$ are not too small: 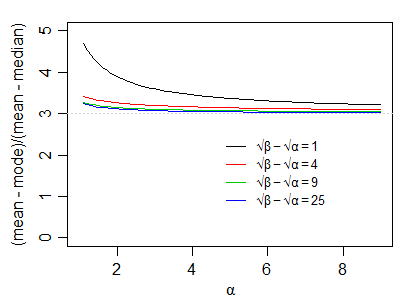 The inverse gamma is also in the Pearson system; it, too, has the relationship for large values of the shape parameter (say roughly $\alpha>10$): 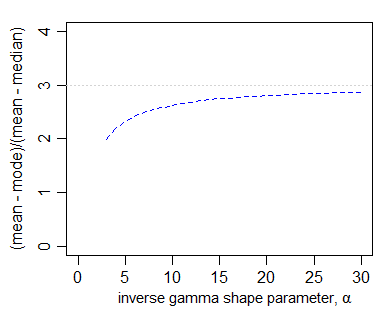 It should be expected that Pearson was also familiar with the lognormal distribution. In that case the mode, median and mean are respectively $e^{\mu-\sigma^2}, e^{\mu}$ and $e^{\mu+\sigma^2/2}$; it was discussed prior to the development of his system and is often associated with Galton.

There are a fair number of well known distributions - several of which Pearson was familiar with - for which it is close to true for a wide range of parameter values; he noticed it with the gamma distribution, but would have had the idea confirmed when he came to look at several other distributions he'd be likely to consider.

This relationship was not derived. It was noticed to approximately hold on near symmetric distributions empirically. See Yule's exposition in The Introduction to the theory of statistics, (1922), p.121, Chapter VII Section 20. He presents the empirical example.

Not the answer you're looking for? Browse other questions tagged distributions mathematical-statistics descriptive-statistics history or ask your own question.

2
prove the difference between mean and median is less than the variance
1
inequality involving mean, median and variance
22
Does mean = median imply that a unimodal distribution is symmetric?
11
Is probability equal about the mean?
7
Why is the arithmetic mean > median on a histogram skewed to the right?
6
What purpose does multiplying by 3 serve in Pearson's second coefficient of skewness?
4
Effect of adding and removing data on variance
4
If I have means and medians, is there a way to average them?
0
derivation of limitation of karl pearsons coefficient of skewness
1
Bounding the distance between the mean and the mode of a unimodal distribution
See more linked questions