Can mean,standard deviation of different populations be similar?

Perhaps this is too obvious but I don't see it. We're analyzing a gene expression dataset of 64 autistic individuals vs 82 normally developed individuals. This dataset is used in this paper here: paper We find that the mean and standard deviation of the (log normalized) data from each group is almost exactly the same. A previous question using this data was asked here: how to interpret normal plot shaped like sigmoid

The plots comparing mean (x-axis) and std. deviation(y-axis) for two groups above look as below: 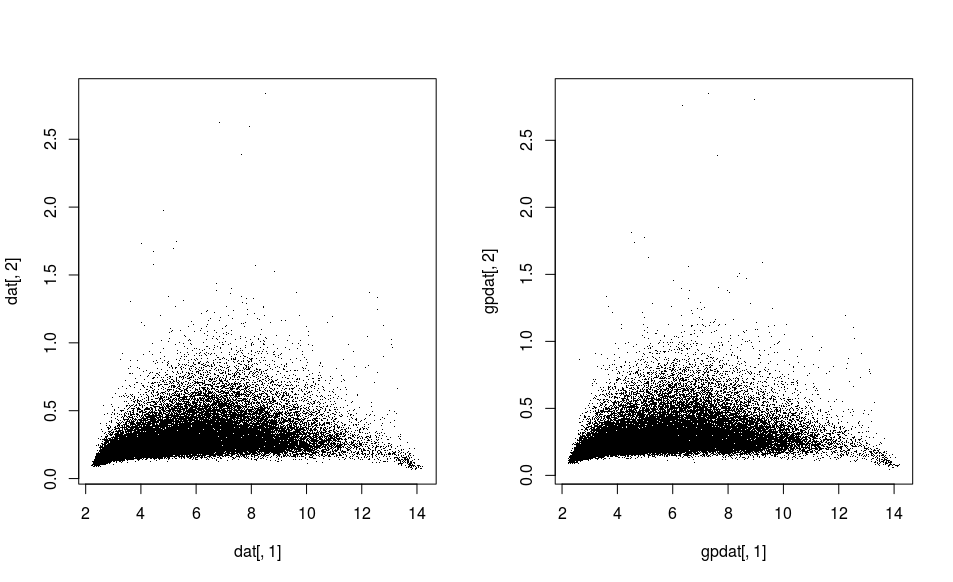 There is no reason why two different populations can't have very similar mean and standard deviations. As pointed out by Tim in a comment to your question, if you are measuring similar things in two different populations, but the thing you are measuring is not affected by the differences between the groups, then the measurements for those two groups should be similar.

For instance, if you are estimating the effect of some treatment on a disease, and the treatment in question has no effect whatsoever, then the treated and the controls should have similar means and standard deviations of the outcome. Similarly, if you are investigating if the income of an individual depends on the weekday that he or she was born, then it seems very reasonable that the distribution of the income should be very similar in both those groups too!

It is worth noting, however, that even if the two populations have the same mean and standard devation, this does not mean that their distributions are equivalent. A classic illustration of this phenomenon is the famous Anscombe's quartet. (Though I am personally very fond of its humorous extension known as the Datasaurus Dozen.)

Not the answer you're looking for? Browse other questions tagged variance t-test mean standard-deviation or ask your own question.