Below are two examples of two x-y data pairs: 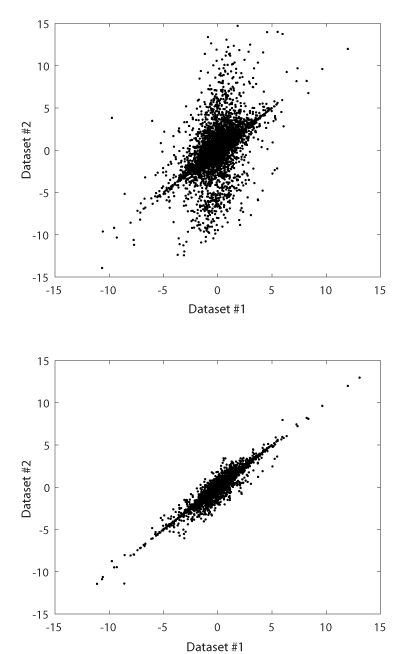 The top example clearly has more "spread" from any sort of linear trend between x and y. The data points are clustered together but there are some outliers. In contrast, the lower figure has a much tighter collection of data points closer to the linear trend. I want to quantify this spread using some sort of statistical test and determine whether x-y are "different" in a "statistically significant" way. I essentially want to be able to say:

I'm not a statistician and I am getting lost in all the different possible tests that are available.

Any ideas or suggestions are appreciated.

Both plots look to be like they would fit well to a linear regression model, and in that context, it sounds to me like you want to test the error variance of the two models. This could be done by formulating your problem as a linear regression where you have a continuous explanatory variable and response variable, plus another explanatory variable that is an indicator of which of the groups you are looking at. To test equality of spread you are essentially just testing for homoscedasticity of the error variance with respect to the group indicator.

Implementation: Here is an example of one way you could do this in R. We first generate some example data and plot this, with a view to mimicking the kind of data you have described in your question. We then analyse the data via a regression analysis. 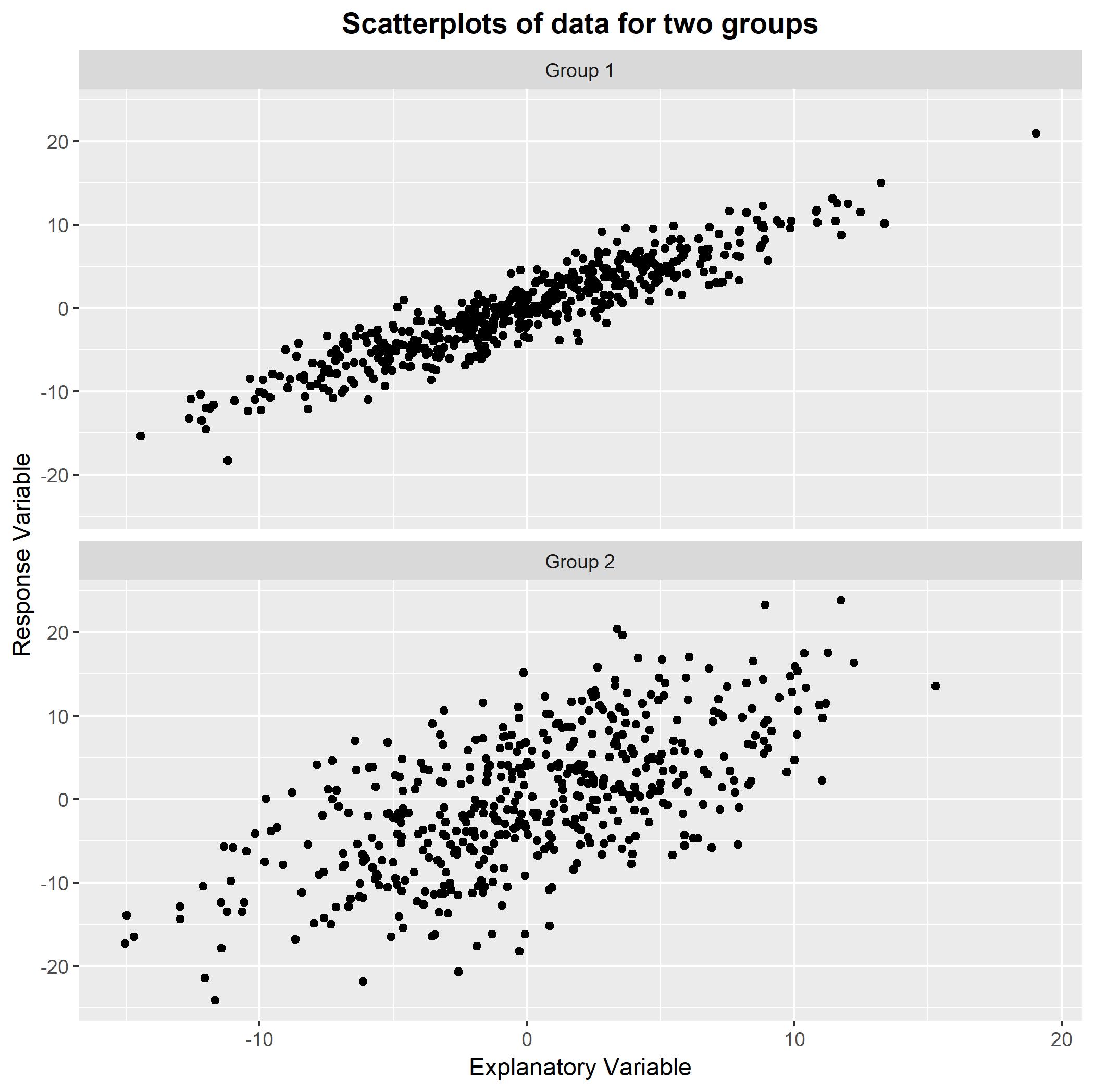 Now that we have generated the example data we can analyse this using regression analysis. We will start by fitting a standard regression model that assumes homoscedasticity (i.e., constant error variance across groups). We can formally test the heteroskedasticity by testing whether the studentised residuals of the two groups have equal variance. This is done using a standard F-test for equality of variance. 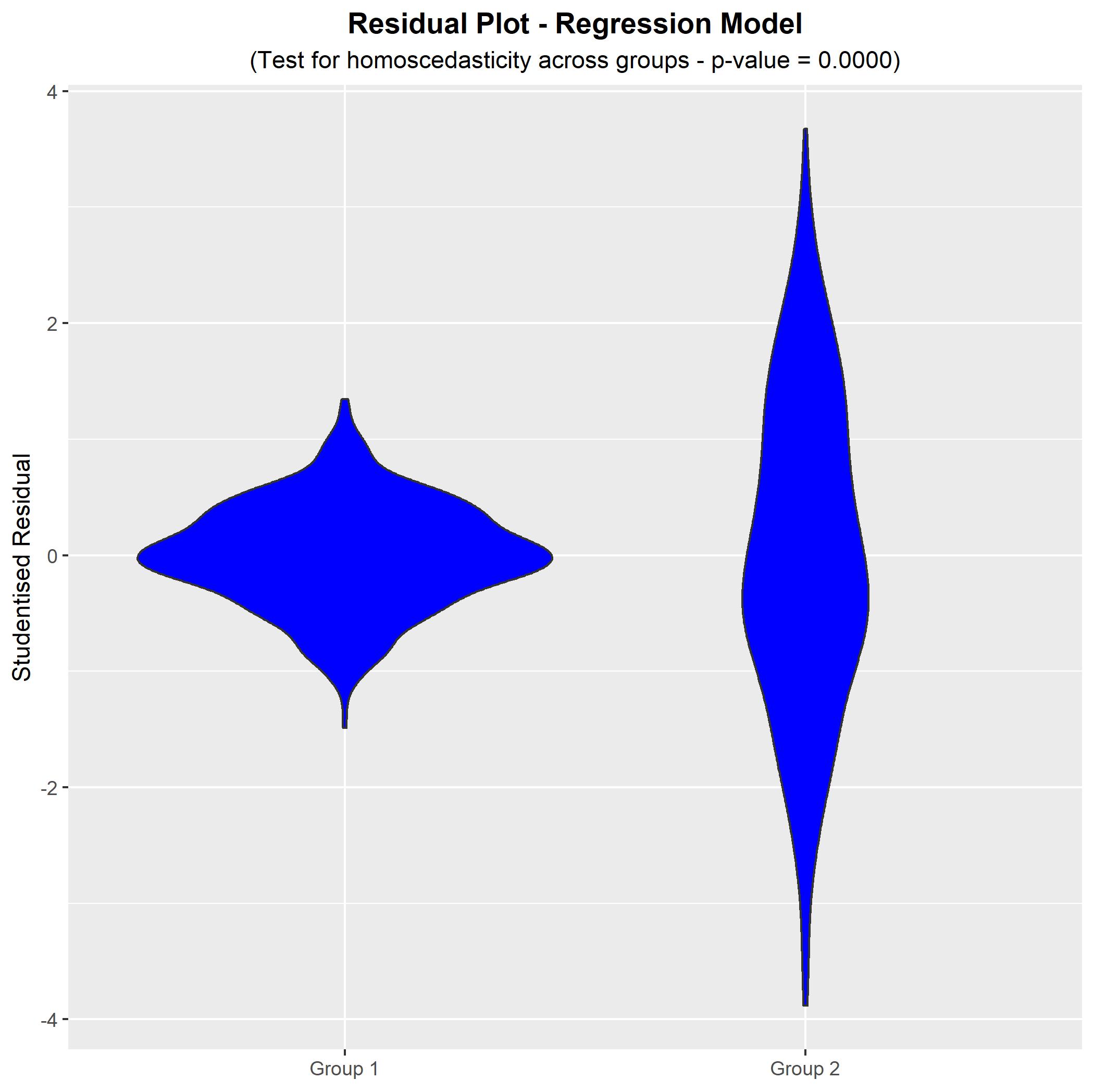 From this plot and the accompanying variance test we can immediately see that there is strong evidence of heteroskedasticity in the model (i.e., error variance differs by group). This is confirmed by the extremely low p-value of the test. As a result, if you want to model the data properly, you will need to switch to a linear regression model that allows the error variance to differ for the two groups (i.e., such a model would estimate two error variances).

Not the answer you're looking for? Browse other questions tagged hypothesis-testing distributions statistical-significance descriptive-statistics or ask your own question.