Why are the residuals in this model so linearly skewed?

I am fitting a simple linear regression model with 4 predictors:

I'm finding that the model predictions are consistently off as shown in this graph: 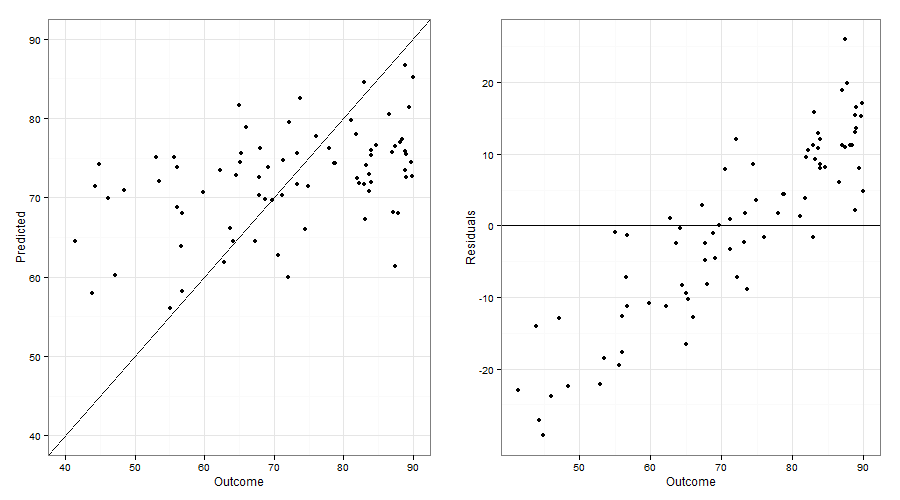 The model clearly overestimates the low values and underestimates the high values, but the miss-estimation is very linear -- it seems like the model should be able to just adjust the slope and fit the data better. Why is that not happening? In case it helps, here are scatterplots of the the Outcome against each of the four Predictors: 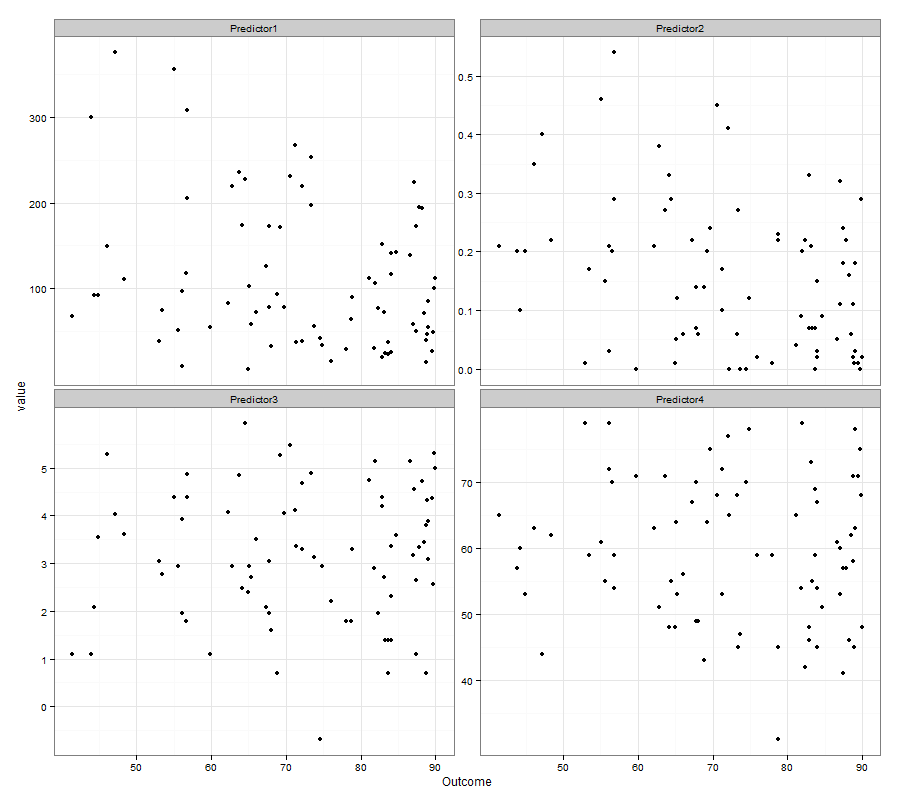 Using the car package outlierTest function did not identify any outliers.

You shouldn't plot the residuals against the predicator values because they are correlated, instead we plot against the fitted values, i.e. $\hat Y$. To see this, consider this simple data set:

and plot the residuals against outcome and fitted values 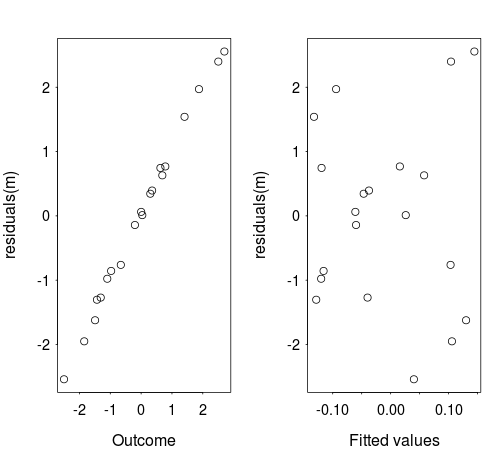 Notice the plotting against the outcome $y$, doesn't give any insight. Hence, it's not really clear if there is something wrong with your model since we don't expect random scatter.

What you are seeing is called "Regression towards the Mean" and is completely expected. Any time that there is variability in the data (and yours looks like it has a bunch) then the prediction values will on average be between the overall mean and the observed values. The plot you created, of the outcome vs the predicted values is not commonly done, for the reasons that you are seeing, it tends to confuse more than enlighten. It is more common to plot the predicted values against the residuals as this plot will show more randomness if the model is reasonable.

csgillespie's example has been criticized for only including 1 predictor when the original question included 4. Here is some quick R code that can be run to show the same patterns with 4 predictors:

Notice that the plots look very similar to those in the original question.

Notice also that in the plot of the original outcome vs. the fitted values that the points (and more so their trend) tend to fall between the $y=x$ line and the mean line. This is the idea of regression towards the mean as originally described by Galton See Here. The points are not randomly scattered about the $y=x$ line like the original poster assumed and what would happen without the regression towards the mean, rather they follow a linear trend along a line that represents proportianality between the $y=x$ line and the overall mean line, just as predicted by Galton. The term regression towards the mean (and variants) is sometimes used for other concepts (some closer related to the original than others) as can be seen in the above article, and that may be where some of the confusion comes from.

2
Probing effects in a multivariate multiple regression
2
Will one-hot encoding for categorical predictor violate the independence assumption of linear regression?
1
Linear bias in linear model?
0
How do I fix a categorical predictor at a mean value when predicting from a regression model with multiple categorical predictors in R?
2
Logistic regression with rare events, all events have large residuals and are influential points
1
Dividing data set based on the Dependent Variable, for interpretation of the coefficients
1
General Question: Should Legitimate Outliers in the Data be Included or Excluded from Statistical Models?