Difference between rungs two and three in the Ladder of Causation

In Judea Pearl's "Book of Why" he talks about what he calls the Ladder of Causation, which is essentially a hierarchy comprised of different levels of causal reasoning. The lowest is concerned with patterns of association in observed data (e.g., correlation, conditional probability, etc.), the next focuses on intervention (what happens if we deliberately change the data generating process in some prespecified way?), and the third is counterfactual (what would happen in another possible world if something had or had not happened)?

What I'm not understanding is how rungs two and three differ. If we ask a counterfactual question, are we not simply asking a question about intervening so as to negate some aspect of the observed world?

There is no contradiction between the factual world and the action of interest in the interventional level. For example, smoking until today and being forced to quit smoking starting tomorrow are not in contradiction with each other, even though you could say one “negates” the other. But now imagine the following scenario. You know Joe, a lifetime smoker who has lung cancer, and you wonder: what if Joe had not smoked for thirty years, would he be healthy today? In this case we are dealing with the same person, in the same time, imagining a scenario where action and outcome are in direct contradiction with known facts.

Thus, the main difference of interventions and counterfactuals is that, whereas in interventions you are asking what will happen on average if you perform an action, in counterfactuals you are asking what would have happened had you taken a different course of action in a specific situation, given that you have information about what actually happened. Note that, since you already know what happened in the actual world, you need to update your information about the past in light of the evidence you have observed.

With the information needed to answer Rung 3 questions you can answer Rung 2 questions, but not the other way around. More precisely, you cannot answer counterfactual questions with just interventional information. Examples where the clash of interventions and counterfactuals happens were already given here in CV, see this post and this post. However, for the sake of completeness, I will include an example here as well.

The example below can be found in Causality, section 1.4.4.

But now let us ask the following question: what percentage of those patients who died under treatment would have recovered had they not taken the treatment? Mathematically, you want to compute $P(Y_{0} = 0|X =1, Y = 1)$.

Note that, in the first model, no one is affected by the treatment, thus the percentage of those patients who died under treatment that would have recovered had they not taken the treatment is zero.

However, in the second model, every patient is affected by the treatment, and we have a mixture of two populations in which the average causal effect turns out to be zero. In this example, the counterfactual quantity now goes to 100% --- in Model 2, all patients who died under treatment would have recovered had they not taken the treatment.

Thus, there's a clear distinction of rung 2 and rung 3. As the example shows, you can't answer counterfactual questions with just information and assumptions about interventions. This is made clear with the three steps for computing a counterfactual:

Here is the answer Judea Pearl gave on twitter:

Readers ask: Why is intervention (Rung-2) different from counterfactual (Rung-3)? Doesn't intervening negate some aspects of the observed world?

Ans. Interventions change but do not contradict the observed world, because the world before and after the intervention entails time-distinct variables. In contrast, "Had I been dead" contradicts known facts. For a recent discussion, see this discussion.

Remark: Both Harvard's #causalinference group and Rubin's potential outcome framework do not distinguish Rung-2 from Rung-3.

This, I believe, is a culturally rooted resistance that will be rectified in the future. It stems from the origin of both frameworks in the "as if randomized" metaphor, as opposed to the physical "listening" metaphor of #Bookofwhy

Counterfactual questions are also questions about intervening. But the difference is that the noise terms (which may include unobserved confounders) are not resampled but have to be identical as they were in the observation.

Counterfactuals are computed in SCMs through the following procedure:

Example 4.11 of this paper explains this intuitively with simple numbers.

To add more insight to this question and the other answers:

Intervention: We want to answer/predict what will happen to variable $Z$, if we intervene on a variable $X$ in the present.

Counterfactual: We want to answer/predict what would happen to variable $Z$, had we intervened on a variable $X$ in the past. But the world has moved on and many other variables of the system have changed. Thus, we can't use intervention in the present to answer such a scenario.

Finally, an example to make the difference between intervention (rung 2) and counterfactual (rung 3) clear. Assuming there are 3 variables $X, Y, Z$ with $Z$ being a common effect of $X$ and $Y$ as shown in the graph below: 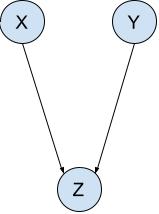 153
Does causation imply correlation?
40
Does statistical independence mean lack of causation?
5
Can causal Bayes Nets compute counterfactuals? If so, are they "worse" than structural causal model counterfactuals?
7
How to think about counterfactuals?
1
Is individual causal effect identifiable when there is no unmeasured confounder?
1
Shouldn't there be a rung four on the the Ladder of Causation?