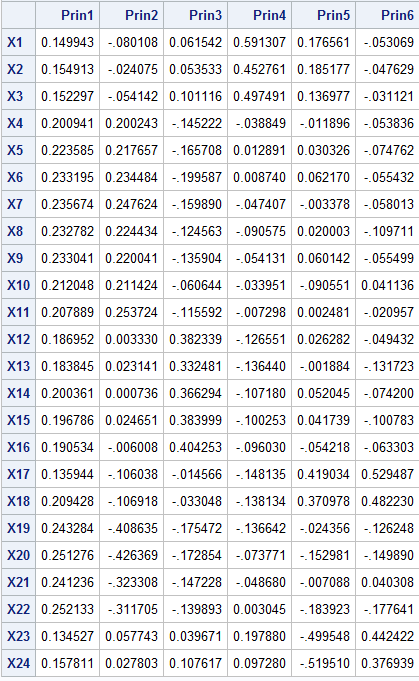 I am doing a PCA on 24 satisfaction variables from a survey.

Respondents indicate their levels of satisfaction towards different aspects of the service.

These variables are all measured in same unit, 1-5, 1= very dissatisfied, 5= very satisfied.

does it mean that respondent is satisfied with that aspect of service,

or does it mean that the respondent puts more weight on that aspect of service when he/she thinks of his overall satisfaction of the service.

If the answer is the former one, I should find the factor with lowest/negative score across all PCs and interpret that that aspect of service needs to be improved, yes?

"It means what it says" will no doubt not seem helpful.

So, let's try to make it concrete.

As the variables are all on the same scale, you do have a choice. Using a correlation matrix will ignore differences in variance (variation) so that e.g. a variable with many 1s and 5s will have the same weight as one with mostly 3s.

If that sounds what you want, go for correlation.

If not, go for covariance.

In any case, look at the variances, or equivalently the standard deviations (SDs), of the variables: if they are about the same, it should not matter much which you choose. If even one variable has very different variance (SD), it will matter.

For data like yours, I would typically use the covariance matrix. If say one variable is nearly constant, it doesn't much help to explain patterns of variation or covariation and I would see no point in standardising so it does, which would just mean that small noise is amplified.

In practice, researchers don't usually include a question unless they expect variability that is interesting and informative, so SDs may not differ enormously.

On a different note, I would be cautious about putting all 20 variables into a PC unless they are measures of the same underlying phenomenon. It is often much more fruitful to be strict about looking only at clusters of variables that make sense as being closely related.

EDIT A table of results (loadings?) has been added. You seem to be throwing all 24 (!) (not 20) variables into one PCA. As already hinted, I don't usually find that helpful unless variables all have similar meaning in the first place. I find it's more helpful to show correlations between original variables and PCs; that's not always a default from software and you may have to do some work to get them. Here PC1 just appears to be an average of everything (which can happen). Any interpretation of results needs more subject-matter knowledge than we can possibly have.

Although you asked a question, you aren't saying whether these results come out of a covariance or a correlation matrix.

Also, the whole question is still backwards. It perhaps needs to start "P people in situation S were asked Q questions with the aim of finding out about X" -- where the abstractions are all to be made concrete.

Not the answer you're looking for? Browse other questions tagged pca descriptive-statistics or ask your own question.

198
PCA on correlation or covariance?