Here partial 2SLS (I coined this term and found it descriptive) is the approach that SAS uses for 2SLS. Compared to "ordinary" 2SLS which in the first stage projects all explanatory variables $X$ onto the column space of the instrumental variable matrix $Z$, partial 2SLS will first allow some of the explanatory variables to be labelled as endogenous whereas the others are left as exogenous, and in the first stage only endogenous variables will be projected onto $Z$ and exogenous variables will remain unchanged. Below I'll post the details for how SAS computes the coefficients for the partial 2SLS approach, or you can just go to check SAS's syslin manual (p2144-2145): 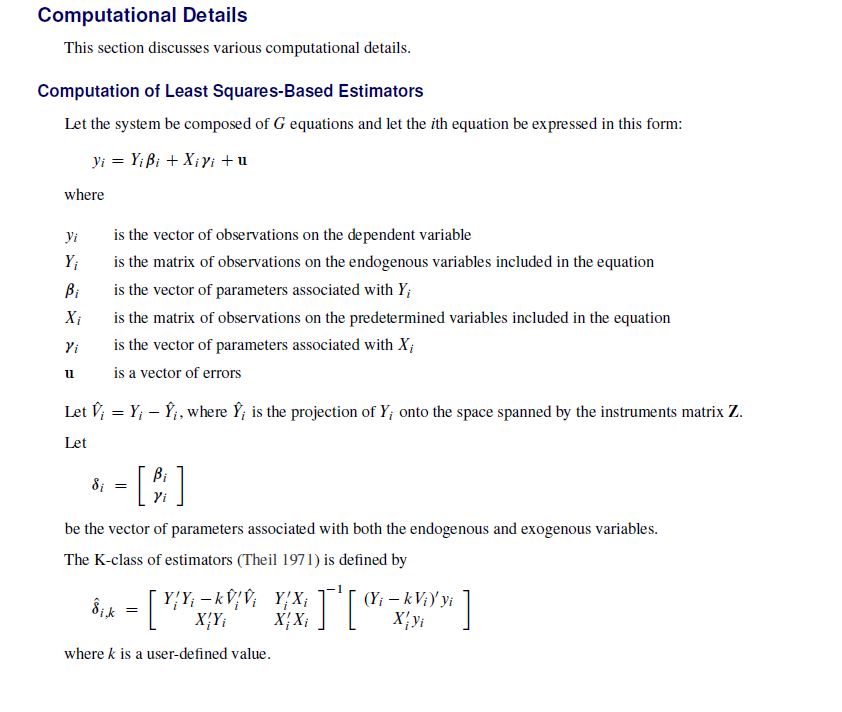 The above gives an explicit formula for computing the coefficients. However, I couldn't find within the manual how to estimate the standard errors of the coefficients. Note that, since we're no longer using the "ordinary" 2SLS, the classical 2SLS estimator that appears in many places on the Internet or in the econometrics tutorials (e.g. Greene's book) is no longer suitable here.

Hence, what would be an appropriate estimator for $\Bbb V(\widehat\delta_{2SLS})$ under the partial 2SLS model? Or, is there any way to find out how SAS computes it in details? Thanks!

EDIT: it can be shown that, under the exogeneity assumptions that $$\Bbb E(\epsilon\mid \mathbf x) = 0,\quad \Bbb E(\epsilon\mid \mathbf z)=0$$ the partial 2SLS estimator $\widehat\delta_{2SLS}$ is still (asymptotically) consistent. But it's not clear to me whether $\widehat\delta_{2SLS} - \text{vec}([\beta,\gamma])$ still asymptotically follows a normal distribution.

Say, you want to explain height of people via gender, age and...height. The fitted value for someone who is 1m81 will always be 1m81 given that s/he is male/female, of whatever age and 1m81.

There is then also no issue about other standard errors.

1
Asymptotic Efficiency of Two-Stage Least Squares
13
Standard errors of a two stage least squares regression, Stata
5
F-test and Rank test for underidentification
13
How to interpret second-stage coefficient in instrumental variables regression with a binary instrument and a binary endogenous variable?
10
Why is the variance of 2SLS bigger than that of OLS?
4
How does IV 2SLS obtain a causal coefficient?
3
Interaction with endogenous variables in the first stage