Can I conclude that $\mathcal N(p, p(1-p))$ could represent an approximation of $bernoulli(p)$?

Since all the RVs are binary, then they can be modeled as Bernoulli RVs.

In case I am not interested in the exact probability of the joint, the can I use the normal distribution to approximate each bernoulli variable?

The figure shows plots of the distribution function of various Bernoulli$(p)$ variables in blue and the corresponding Normal distributions in Red. The shaded regions show where the functions differ appreciably.

Here is a plot of the maximum difference between the two functions, as it depends on $p:$ 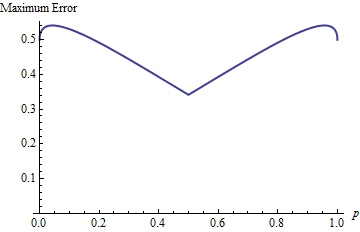 It is never smaller than $0.341345,$ attained when $p=1/2.$ Because probabilities all lie between $0$ and $1,$ this is a substantial error. It is difficult to conceive of circumstances where this approximation would be acceptable, except perhaps when $x\lt 0$ or $x\gt 1:$ but then why use a Normal distribution at all? Just approximate those values as $0$ and $1,$ respectively, without any error at all.

Not the answer you're looking for? Browse other questions tagged normal-distribution approximation bernoulli-distribution or ask your own question.

2
Change detection in a Bernoulli sequence
1
Testing for samples being drawn from identical Bernoulli r.v.'s
4
Bernoulli estimator bias
4
Second order approximations of expected exponentiated sums of dependent Bernoulli random variables
18
Distribution of $\frac{\sum_{i=1}^n X_iY_i}{\sum_{i=1}^n X_i^2}$ where $X_i,Y_i$s are i.i.d Normal variables
0
Use the Lehmann-Scheffé theorem to deduce that $\overline{X}$ is an UMVUE estimator for $\theta$