I've been trying to teach myself about Network Analysis, and developing DAG charts in R. Let's say that I have the following data.

Given what I'm trying to analyze, I know that the DAG plot should be as follows:

However, when I utilize the bnlearn package to generate the plot, it comes out as follows. It just can't be correct, and should be in the opposite direction. 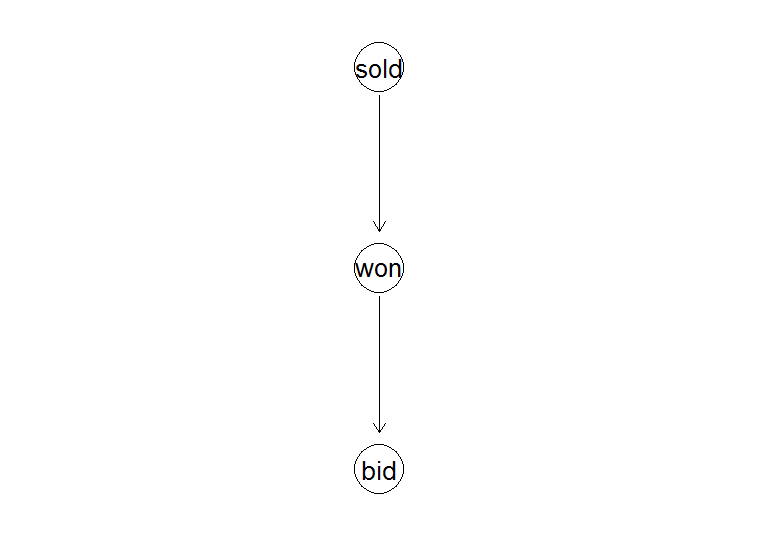 Can anyone help with diagnosing the problem in R? Is there something I'm missing in the code? or of my understanding of BN's? is this an issue w/ what I pass as the algorithm to use in 'score'?

which is what you want.

To show this in R, try this

Basically, you can change the direction of any arc in the network and get a graph of the same equivalence class, so long as that arc is not in a v-structure.

I think what you're asking for is the whitelist parameter. Use this to indicate which edges the network should include.

whitelist
a data frame with two columns (optionally labeled "from" and "to"), containing a set of arcs to be included in the graph.

Not the answer you're looking for? Browse other questions tagged r bayesian bayesian-network or ask your own question.

6
Prediction with Bayesian networks in R

1
Predicted Probabilities for Logit Models
4
How to validate and compare models predicting a binary variable?
3
Predicting whether a potential sale will be won or lost
2
Addressing “NOTE: Results may be misleading due to involvement in interactions” warning with Tukey post-hoc comparisons in lsmeans R package
0
Combine results from two models on a Bayesian network
0
R - Plotting a ROC curve for a Naive Bayes classifier using ROCR. Not sure if I'm plotting it correctly