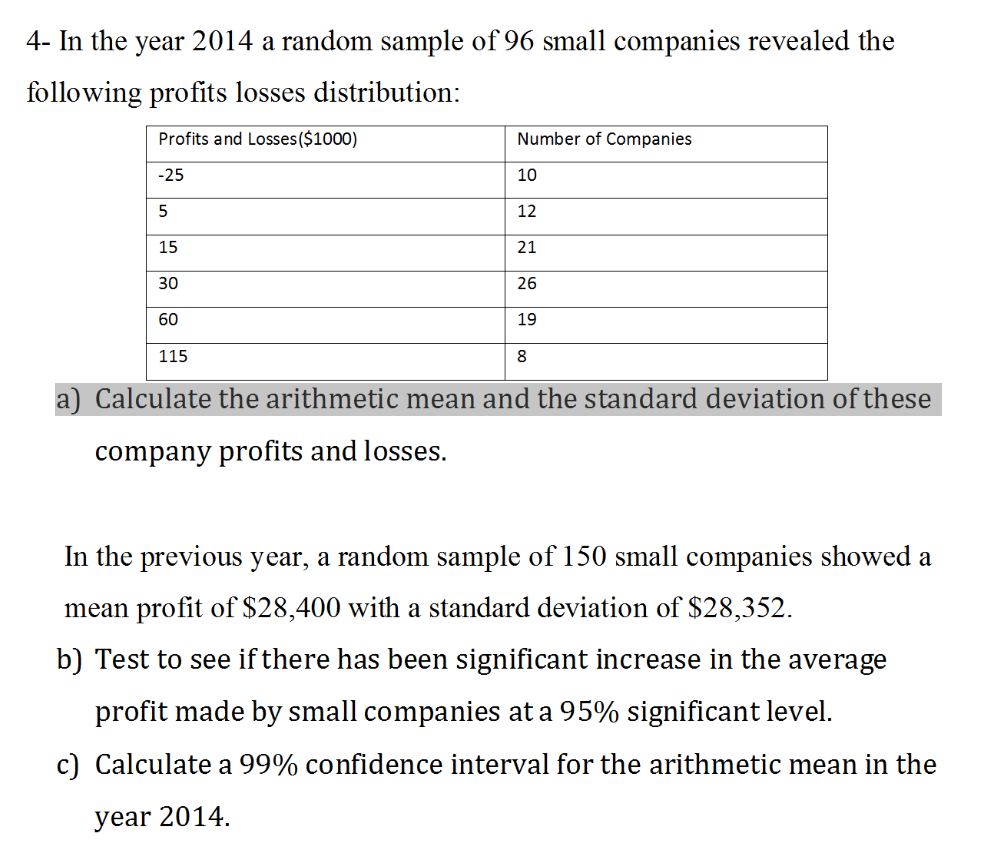 I am not asking for the answers!

I am just confused why the solution is using the pooled-variance t-test, instead of the paired difference test.

The samples are undoubtedly from the same population to me, and I can't imagine that profits/losses from different years are considered independent samples, instead of related samples.

Is the solution or my understanding wrong?

Suppose that, in 2014, instead of gathering data from another random sample of 96 companies, we again collected data from those same 150 companies that we looked at in 2013. What this would allow us to do is take the two measurements we have from each of the 150 companies, and calculate the difference between each pair of measurements. This results in a list of 150 differences, with a certain mean and variance. We can then simply look at whether those differences are significantly different from 0, which is equivalent to a one-sample t-test. Importantly, you only need to consider a single distribution in this case: the distribution of the differences between paired measurements. This is how a paired-samples t-test works.

In the problem statement, we instead have a new random sample of 96 companies in '14. These 96 companies are not the same as the ones we had in '13. So, there are no paired measurements in this case, and we cannot construct a single distribution of difference scores to work with. Instead, we have one distribution of profits from '13, and another distribution of profits from '14, and we now essentially have to figure out whether those distributions are sufficiently different to inspire confidence that average profits across the population were different between '13 and '14. This is an independent-samples t-test. It is generally less powerful, because when you look at the difference between two distributions, the variance of that difference is the sum of the variances in the two individual distributions. Whereas, in the paired-samples t-test, we only needed to compare a single distribution to a fixed value (0), and so we had to deal with less variance.

To address your specific questions:

The samples are undoubtedly from the same population to me

Well, that is actually what you're trying to assess with your t-test. This hinges on the statistical definition of 'population', which doesn't necessarily match the colloquial definition. Yes, in both cases we are talking about small companies. But what we want to know is if their population statistics were different between '13 and '14. Our null hypothesis is that both samples were drawn from the same population distribution, with the same average profits. But our alternative hypothesis is that the companies in '14 were drawn from a different population, with a different mean profit.

and I can't imagine that profits/losses from different years are considered independent samples, instead of related samples

Again, in common speech we might say they are related as they are measuring similar things. But for statistical purposes, the important question is: can we discern pairs of measurements that came from the same source, varying only in one aspect that we're interested in. So while, in the problem statement, both samples were profit measurements from small companies, they weren't the same small companies, and so none of the measurements in '14 could be paired up with measurements in '13. We took an entirely new (independent) sample of companies in '14, rather than measuring the same companies again.