I have been working with count data (n=66) recently, trying to fit a simple model to explain distribution in an outcome whereby the count (number of successful trials in a region) is relative to an offset (the total number of trials in the region). The data is panelled, with each region (11) appearing 6 times in the dataset.

The 'best fitting' model is a Poisson Regression with the log of the total trials in the region serving as an offset. Zero-negative inflation, multilevel, and OLS don't cut the mustard or provide any significant improvements on the fit. Standard errors are clustered on the regions, and there are 5 predictor variables in total. 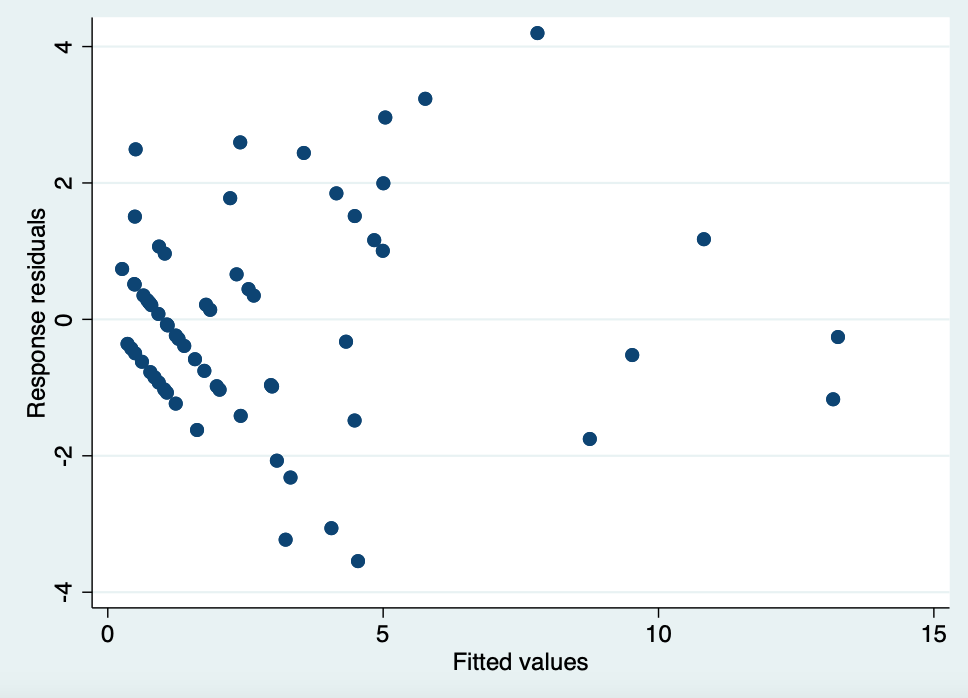 As I understand it, this patterning is almost the reverse of what we expect to see in a poisson setting, whereby the mean residual variance should increase (rather than decrease) as we move along the fitted points?

Removing either of the clustering or the standard errors does little to change the distribution of the residuals. The zero-inflation models also did not show much different.

My question is whether or not the patterning shown in this residual plot is anything to be necessarily worried about? Do I need to go back to the drawing board and find a 'better fit', or is this always likely to happen with count data including a fairly high (but not insanely high) amount of zeros (about 20%)?

Further, can anyone recommend a DHARMa equivalent in Stata for producing reliable GLM QQ plots?

The number of data points is too low to read much into the residual plot. In a comment this is explained with

If you discard 5 points with fitted values >=8, you will find that variation of the residual increases along the fitted values, and it is what the Poisson regression should be. So I do not think you need to worry about Poisson assumption.

and there is more discussion in the comments. In short, there is nothing here to worry about.

Not the answer you're looking for? Browse other questions tagged generalized-linear-model stata residuals poisson-regression or ask your own question.