Is there a commonly accepted effect size parameter for pairs of Bernoulli processes?

An analog that suggests a solution.

Back to the problem of interest.

However, I haven't encountered this solution to the problem at hand anywhere in the statistics literature. It's appealing to me because it has a nice interpretation: it's the difference in successes of each of the two groups normalized by a number that represents a kind of weighted combination of the variations one would expect if a student were to take a test with many questions, each having a probability $\rho_1$ or $\rho_2$ of being answered correctly depending on the treatment.

If the effect size metric makes sense for your application, then your next step is to see if you can get consensus for its use.

The issue (in my mind) about effect sizes is how to determine how big is big. That depends on the subject matter area AND the particular application. Indiscriminant use of Cohen's small, medium, and large categories outside of the original application is at best not good practice.

For your effect size metric one can graphically show "all possible values" and that might suggest for your application what is small, medium, and large and maybe even suggest modifications in the effect size metric. 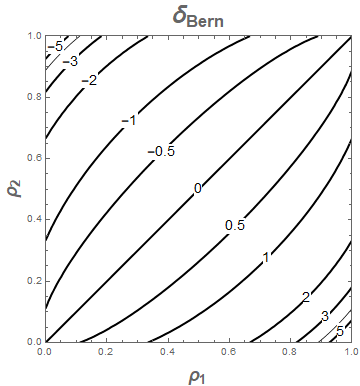 Not the answer you're looking for? Browse other questions tagged inference effect-size parametric treatment-effect or ask your own question.

2
Is a biased or unbiased estimator used for pooled SD in calculating Cohen's d?
7
Sufficient Statistic for non-exponential family distribution
2
Effect size and standard error for Mann-Whitney U statistic
1
When is a test statistic considered unusual?
2
Is it ok to add a constant to the means in the log transformed ratio of means?
0
Effect Size for Wald Test
0
How can I test whether an individual treatment mean significant or not?