Consider the following example from This binomial test wikipedia article:

Suppose we have a board game that depends on the roll of one die and attaches special importance to rolling a 6. In a particular game, the die is rolled 235 times, and 6 comes up 51 times. If the die is fair, we would expect 6 to come up 235/6 = 39.17 times. Is the proportion of 6s significantly higher than would be expected by chance, on the null hypothesis of a fair die?

The article then goes on to compute the p-value for a one-tailed binomial test (i.e. it finds the probability of getting 51 or more sixes from 235 rolls).

Then the article says that we might be interested in using a two-tailed p-value (Excerpt is quoted below). I have two questions:

It's useful to consider a couple of things:

With those ideas in place, let's not discuss the calculations for the problem at hand.

When looking at the one tailed alternative ($p_6>\frac16$), the test statistic would just be $T$, and values considerably larger than the expected difference of zero will be more consistent with the alternative hypothesis than they would be with the null. 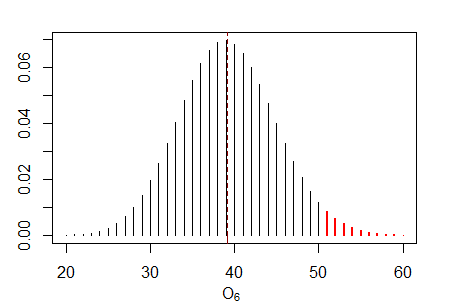 Note that what is plotted here is the count rather than the count minus its expected value; the appearance is the same, the only thing that is different is how the x-axis is labelled. The red parts represent the terms that make up the p value. 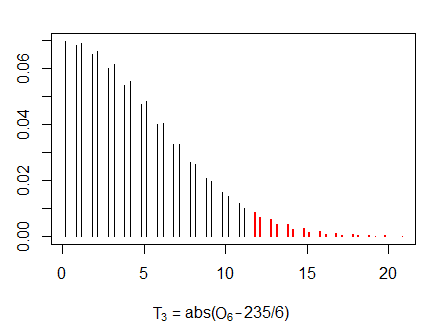 We could of course achieve the same end by considering our original $T$ but look at the distance from expected in both directions: 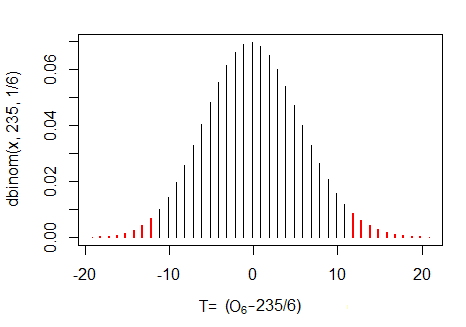 2
Binomial probability function
0
Find MLE by combining two different experiments
6
How to make a two-tailed hypergeometric test?
4
Relation between power and sample size in a Binomial Test?
0
Buckets of dice - Binomial probabilities of either event occuring
5
Testing whether a die is biased, reasoning about the approach
1
Which game is more advantageous?
1
How to derive the binomial test?