I have a question regarding calibration plot for a binary logistic regression model (calibrate) in the rms(regression modelling strategies) package. The Bias-corrected curve (see below) shows if the apparent fit of the model is overfited.

But how is the bias corrected curve obtained?

My understanding of this is as follows:

1, fit a binary logistic model $M$ on the whole sample

2, fit a model $M_b$ from a bootstrap sample

3, predict probabilites from $M_B$ from the bootstrap sample and measure the distance to 45 degree line, $dist_B$, from the smoothed estimate(s) (evaluated at the predicted probabilies).

4, predict probabilities from $M_b$ on the whole sample and measure the distance to 45degree line,$dist_F$ from the smoothed estimate(s) (evaluated at the predited probabilites).

6, complete steps 2-5 many times and average 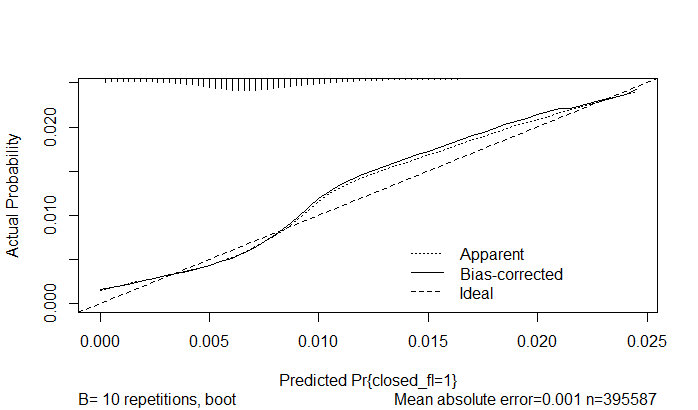 The Regression Modeling Strategies book and course notes go into detail. This is the Efron-Gong optimism bootstrap in its original version. The bootstrap assumes that you are not using the outcome variable in any way to select the predictors in the model, or that you have done so using only backwards stepdown variable selection and you repeat this select for each bootstrap sample using calibrate(..., bw=TRUE).

Briefly, the bias that the bootstrap is estimating is the bias in how far the calibration curve at a single $x$-coordinate is from the line of identify.

Use at least 200 bootstrap repetitions. Were your sample size smaller, use 400.

Not the answer you're looking for? Browse other questions tagged logistic bootstrap bias validation regression-strategies or ask your own question.