What does a p value histogram that is “normally” distributed mean?

Let's say I performed 100 tests and and want to correct for multiple comparisons. Before I do so, I plot the unaltered p values in a histogram to see what the distribution looks like.

If the null were true, you would expect that a histogram of unaltered p values would be a uniform distribution. If it was right skewed, you might conclude that overall, there seems to be something real going on. 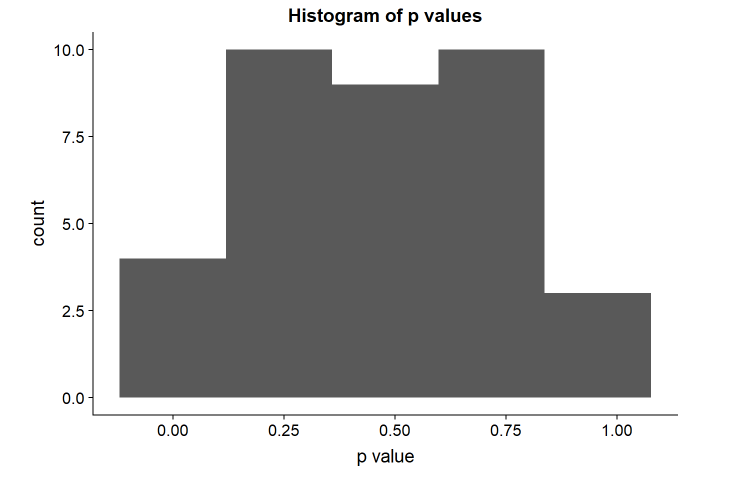 What does this mean?

If you performed N independent tests, any number of which might be probing real or null effects, there is no telling exactly what distribution of p-values you ought to expect.

You, presumably, do not know the ground truth for each and every one of your tests (or else you wouldn't be doing them in the first place). Therefore, I don't think you can form a strong expectation about the distribution of p-values you ought to see, other than: if for some portion of my tests, the null hypothesis in truth does not hold, then across all my tests I expect to reject the null more than 5% of the time (assuming p<0.05 is your criterion for rejecting the null).

Not the answer you're looking for? Browse other questions tagged p-value multiple-comparisons histogram or ask your own question.

1
Evaluation of methods under the null by p-value histogram
5
Why so many large p-values when I repeat an experiment?
6
Understanding multiple KS tests
4
Interpreting normality tests results
6
Interpretation of p-value histogram for differential methylation analysis: what can explain prevalence of large p-values?
28
Does a uniform distribution of many p-values give statistical evidence that H0 is true?