When reviewing Infersent's architecture here, I noticed that, after encoding the premise and hypothesis to obtain two vectors u and v, they feed the set of fully connected layers with:

While I can somewhat get a feel for why points 1 and 3 were used, I do not really understand how an element-wise product can help in this case.

My intuition for 1 and 3 is the following:

Does anyone know, why the element-wise product would help?

PS: A picture of the infersent architecture can be found below (extracted from the paper). 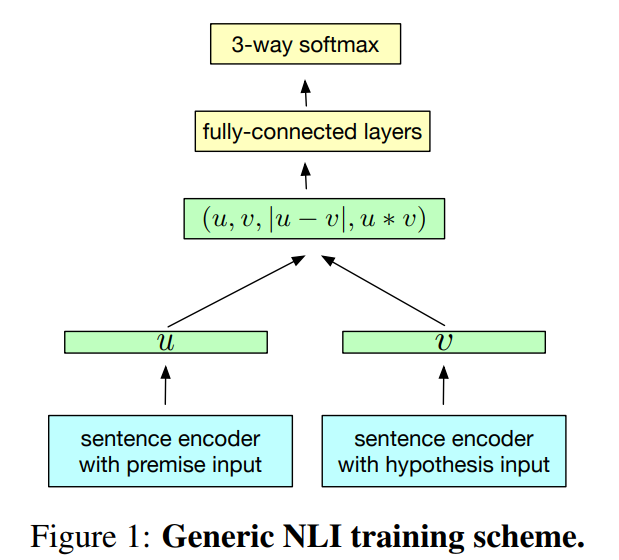 First of all, many tricks in deep learning are used because they were "proved to work", with post factum theoretical rationalizations. So in many cases the "why" questions can be only answered in terms of "why do we think that this worked", rather then any deeper rationale behind it.

In this case, the network encodes both sentences using same encoder, obtaining two vector representations $u$, $v$ for two sentences. They are feed into fully-connected network as features:

This is a feature engineering build-in the architecture of the network. It is a kind of thing that may not exactly be needed and could be figured out on it's own by a big enough network, but may speed up and simplify the computation. Same with choice of the aggregating functions, in other cases, different combination of them may work better, so you could experiment with them as well.

Not the answer you're looking for? Browse other questions tagged word-embeddings embeddings or ask your own question.

30
Utility of feature-engineering : Why create new features based on existing features?
3
Neural Networks, what is the best way to deal with sequence when order does not matter?
2
Feature Engineering: Should I drop features that can be calculated using other features?
3
Does it make sense to multiply two embedding vectors?