I am doing chi-square tests using Scipy. Just realized the test statistics will change even though you simply rescale all data and the testing outcome could change.

I understand that, from the definition of Chi-Square, the test statistic will double and p-value will change. But I think rescaling data should not change statistic testing results. What logic do I make mistake here?

If you I understand your question correctly, you are not re-scaling the data, but are incorrectly claiming to have twice as much data as you do.

Notice that in a chi-squared test, the degrees of freedom depend on the number of categories, not the number of rolls of the die.

This example illustrates that a bar graph of counts can be misleading as a graphic to decide goodness-of-fit. It is a good idea to show the total number of observations in the caption; otherwise, the vertical scale is the only clue to the size of the experiment. The bar graph below shows the original counts; a bar graph for the fake experiment with 360 rolls of the die would look the same except for the numbers on the vertical scale. (In general, it is often a challenge to make useful graphs for categorical data.) 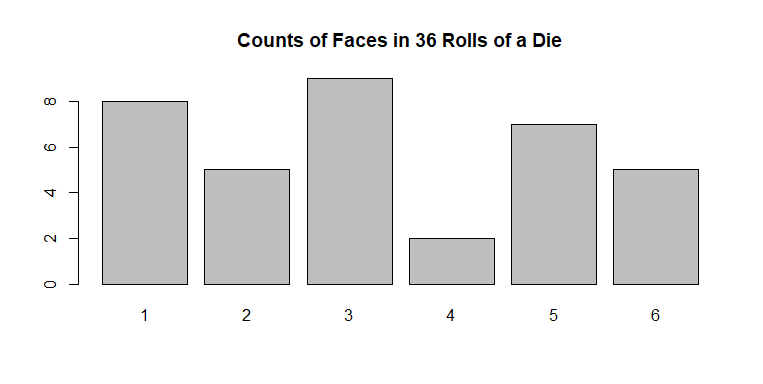 Here the degrees of freedom $\nu$ depend on the sample size, which has not changed by re-scaling the data from inches to millimeters. However, you might get a different result by using a nonlinear transformation (such as changing US miles per gallon to liters per 100 km), which would also change normal data to nonnormal data.

Indeed. Don't do that.

What logic do I make mistake here?

When you multiply a variable by a constant, the variance scales by the square: $\text{Var}(kX) = k^2 \text{Var}(X)$. This is the behavior you're anticipating. This means that the "unusualness" of an observation doesn't change by scaling it -- for example, consider a 'typical' z-score: $(X-\mu)/\sigma$ is the same as $(kX-k\mu)/(k\sigma)$

But for typical models for counts, its different; they don't have a separate variance, but rather the variance is a function of the mean. The simplest case is Poisson counts (one of the cases for which a chi-squared test is suitable after conditioning on the margins). With a Poisson, the variance is equal to the mean. If you observe this process for longer, the mean will increase in proportion but you have more information, and so the standard deviation increases more slowly.

If you double the count you're saying "I know this value relatively more precisely" (the way you get bigger counts is observing the process for longer -- gathering more data; when you double the counts you're asserting you have done so, even though you haven't)

For a Poisson variate, a 'z-score' is $(O_i-E_i)/\sqrt{E_i}$. If you double $O_i$ and $E_i$ without having more information you will compute its z-score as $(2O_i-2E_i)/\sqrt{2E_i}$ - this is $\sqrt{2}$ times as large as the z-score you started with (and the contribution to chi-squared is thereby doubled). You're incorrectly putting additional weight on this discrepancy in count. (A multinomial count has a somewhat different variance function but the underlying issue is basically the same - you can't just scale the count.)

Deal with counts as counts. Don't replace them with percentages, nor with counts in thousands. Just as counts -- so the chi-squared statistic can correctly scale them for the variance.

1
What are the alternatives of a chi square test in testing for changes in categorial data?
3
Chi-square test of equality for 25th and 75th percentile
0
Are Chi-squared test and F-test both eligible for testing significance in ANOVA?
3
Confused about how to interpret Chi square results
1
Are there statistical tests for testing multiple sample proportion?
0
How IBM SPSS calculates exact p value for Pearson Chi-Square statistic?
2
Using neyman-pearson to reach a chi-square test for the variance of a population
0
Is Chi Square test statistic too large to draw conclusions?