Determining largest contributor in a group

I don't know much about statistics so bear with me. Let's say I have a set of 1000 workers. I want to figure out who the hardest worker is but I can only measure the amount of work getting done in groups of 1-100 over an hours worth of work. Assuming each worker always does around the same amount of work, over a large number of trials and combinations can I rank my workers by who works hardest?

Note: this is just a metaphor, so don't worry about actually running the tests, just assume I already have a large set of data.

For each hour we know which workers are working and how much work got done. From that information I want to find out who is doing the most work.

If the data were in JSON format it would look something like this:

David Harris has provided a great answer, but since the question continues to be edited, perhaps it would help to see the details of his solution. Highlights of the following analysis are:

To carry this out, let's create some realistic data using specified formulas so we can evaluate the accuracy of the solution. This is done with R:

In these initial steps, we:

With this synthetic workforce in hand, let's simulate their work. This amounts to creating a group of each workers (schedule) for each observation (eliminating any observations in which no workers at all were involved), summing the proficiencies of the workers in each group, and multiplying that sum by a random value (averaging exactly $1$) to reflect the variations that will inevitably occur. (If there were no variation at all, we would refer this question to the Mathematics site, where respondents could point out this problem is just a set of simultaneous linear equations which could be solved exactly for the proficiencies.)

I have found it's convenient to put all the workgroup data into a single data frame for analysis but to keep the work values separate:

This is where we would begin with real data: we would have the worker grouping encoded by data (or schedule) and the observed work outputs in the work array.

Unfortunately, if some workers are always paired, R's lm procedure simply fails with an error. We should check first for such pairings. One way is to find perfectly correlated workers in the schedule:

The output will list pairs of always-paired workers: this can be used to combine these workers into groups, because at least we can estimate the productivity of each group, if not the individuals within it. We hope it just spits out character(0). Let's presume it does.

One subtle point, implicit in the foregoing explanation, is that the variation in the work performed is multiplicative, not additive. This is realistic: the variation in output of a large group of workers will, on an absolute scale, be greater than the variation in smaller groups. Accordingly, we will get better estimates by using weighted least squares rather than ordinary least squares. The best weights to use in this particular model are the reciprocals of the work amounts. (In the event some work amounts are zero, I fudge this by adding a small amount to avoid dividing by zero.)

This should take just one or two seconds.

Before going on we ought to perform some diagnostic tests of the fit. Although discussing those would take us too far afield here, one R command to produce useful diagnostics is

(This will take a few seconds: it's a large dataset!)

Although these few lines of code do all the work, and spit out estimated proficiencies for each worker, we wouldn't want to scan through all 1000 lines of output--at least not right away. Let's use graphics to display the results.

The histogram (lower left panel of the figure below) is of the differences between the estimated and actual proficiencies, expressed as multiples of the standard error of estimate. For a good procedure, these values will almost always lie between $-2$ and $2$ and be symmetrically distributed around $0$. With 1000 workers involved, though, we fully expect to see a few of these standardized differences to stretch out $3$ and even $4$ away from $0$. This is exactly the case here: the histogram is as pretty as one could hope for. (One might thing of course it's nice: these are simulated data, after all. But the symmetry confirms the weights are doing their job correctly. Using the wrong weights will tend to create an asymmetric histogram.)

The scatterplot (lower right panel of the figure) directly compares estimated proficiencies to actual ones. Of course this would not be available in reality, because we do not know the actual proficiencies: herein lies the power of the computer simulation. Observe:

Here are the four plots generated during this process. 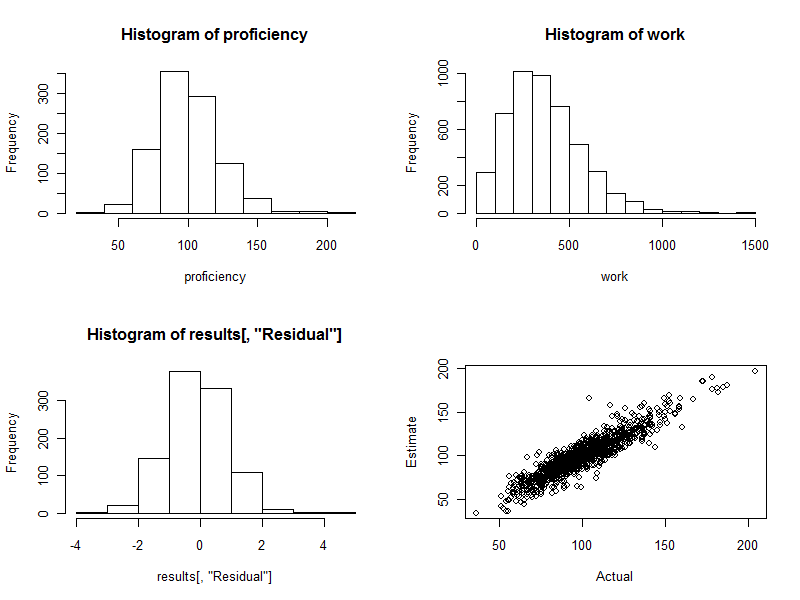 Finally, note that this regression method is easily adapted to controlling for other variables that plausibly might be associated with group productivity. These could include the group size, the duration of each work effort, a time variable, a factor for the manager of each group, and so on. Just include them as additional variables in the regression.

You'd want to set up your data something like this, with 1 indicating that the person was part of the team that did that row's work:

Then, you can just do linear regression (assuming everything is additive, etc., as you mentioned in comments). In R, the command would be

The "formula" work.done ~ . + 0 says, in English, that the amount of work done depends on all the other columns (that's the ".") and that groups with no workers would do no work (that's the "+ 0"). This will give you the approximate contribution from each worker to the average group output.

As discussed in the comments, if you have a pair of workers that are always together, the model won't be distinguish the contributions of the two workers from one another, and one of them will get an "NA".

Not the answer you're looking for? Browse other questions tagged r regression data-mining or ask your own question.

4
Logistic regression on categorical data
2
How do I create utility scores from an unequal number of inputs
1
Plotting the gap between two times
3
How can I remove multicollinearity from my logistic regression model?
0
Efficient automated prediction for a 1000 growing, big data sets. How to?
1
using regression model to optimize teams working on work items
3
Suggestions on Modeling Approach to Model Percent Complete of a Task
3
Generating Failure Times