I'm new to statistics and looking for some guidance on choosing my variables for a repeated measures ANOVA.

I'm trying to determine the difference between each of these measures when performed at different times per day: 1. Morning 2. Evening

My thought is that the Indep variable is the time of day and when running in SPSS I would enter morning and evening as the within subjects variable.

column 1: value labels used for the IV 1.00 is morning, 2.00 is evening. column 2: scores on gait speed, then scores for each of the other measures when done in morning column 3: scores on the same 4, when measured in the evening.

Can anyone let me know if I am setting this up correctly? 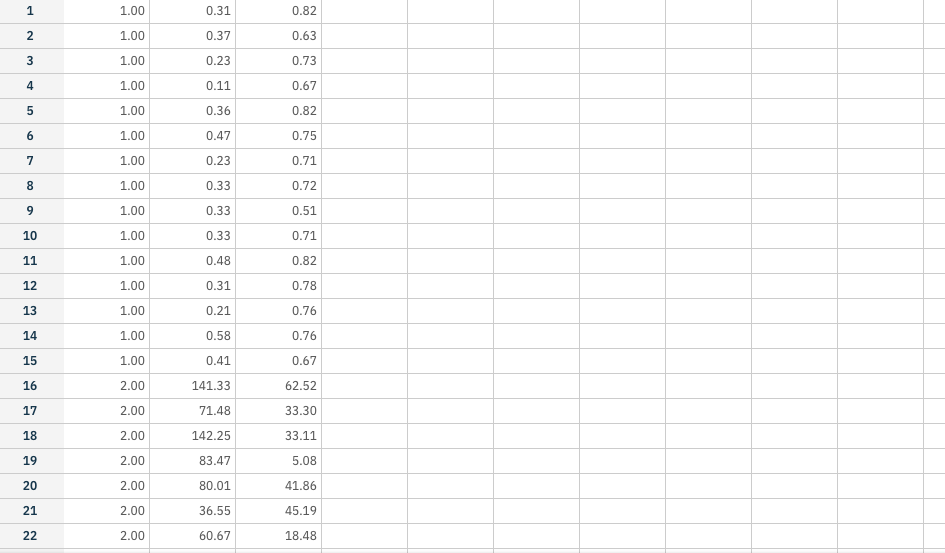 There are two ways to set up data for repeated measures analyses in SPSS. If you're going to use the multivariate general linear model (GLM) approach to repeated measures in GLM, then you want one case per subject, with a variable for each between-subjects factor, one for each covariate, and then a variable for each dependent measured at each time point. This is the only way that you can really straightforwardly handle multiple dependent variables that you don't want to compare to each other (multiple measures in GLM's terminology).

The other way to set up data is to specify both the between-subjects factor(s) and any covariates, plus index variables for any repeated-measures factors and an ID variable that links separate cases in the data to the same subjects as appropriate. This approach is what's used in MIXED and GENLINMIXED, and in UNIANOVA for a more rudimentary classical approach to mixed linear models.

The first form of setup is sometimes referred to as wide, the second as long or narrow. SPSS documentation tends to refer to them as multivariate and univariate or mixed models setup.

Not the answer you're looking for? Browse other questions tagged anova spss or ask your own question.