I have a dataset where I want to predict inflow (people joining a platform) but my all independent variables are binary categorical (0,1). Whereas I want to predict continuous variable (inflow -- number joining in 1002, 2222, etc).

I used a linear model using R. However, my R2 is way too low. Does this mean my model is not good enough to predict the inflow?

Or I can use some other methods, preprocessing or another model to get high R2.

Also could you pls help me interpreting the results form the model.

First of all, let's remember that model interpretation is always contextual (depends on your data and what are you trying to achieve).

However, I'll try to explain some general points. You're in a tricky scenario. The low R squared means that your model only explains 7% of the dependent's variation. Nonetheless, the low p-value means that your model fits very well the data, and therefore the probability of your coefficient actually being zero is very low.

If we plot the regression line and your data points, it would look something like this: 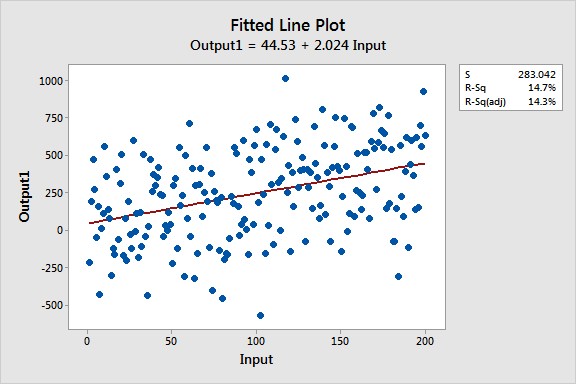 Notice how the regression line (in red) predicts accurately the general trend of the data points, i.e., a positive tendency: the higher the independent variable, the higher the dependent value (this is the low p-value). But the data points are not very close from the regression line, they are heavily scattered around it (this is the low R-squared).

Given this information, let's try to interpret your model (since I don't know what your independent variables actually mean, I'll be as general as possible). Take the variable Friday as an example. If your other variables remain constant, a change in Friday (0 to 1) means that there's an average change in Inflow of about 804.4 units. This would be the same if your model has an R squared of 0.99 or a R squared of 0.01. However, if you were to use this model to predict Inflow with new values for your independent variables, your prediction interval will be fairly high. This is the only point where R squared matters in retrieving useful info from your model.

Now, my friend. A low R-squared is not necessarily bad (and they are fairly common in Social Science research). Yes, a model with a higher R squared would be better, but your model fits the data very well and can give you very useful information already on the relationship between your independent variables and your dependent variable.

Edit: High R squared values are not Inherently good., your model can account for a high proportion of the dependent's variation, but have coefficients that underestimate or overestimate the data distribution.

Take a look a this exemple: 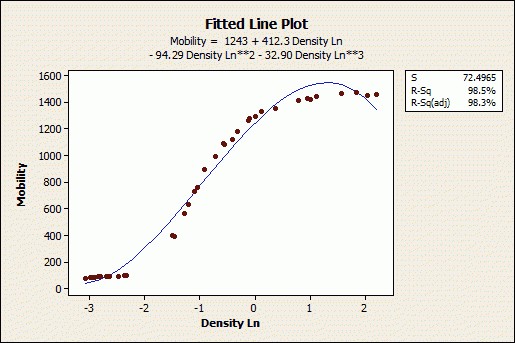 Although there's a R square of 0.985, you can clearly see that the regression is biased (at some points it overestimates, while at others it underestimates).

I'd recommend that to better assess your model, you should plot the fitted values vs the observed values. You can also plot the standardized residuals, to better picture what you're dealing with.

Also, to improve your model (not necessarily your R squared), keep in mind that your dependent variable may be affected by other factors that are not currently in your. Also you can try some form of factorial ANOVA.

There are a few things to discuss here:

then these are the regression methods you should be using (dependent on the overdispersion of your data). Linear regression follows the assumption that your outcome is normally distributed.

2.) Using categorical predictors is still valid even if your outcome is continuous. For linear regression, you would code the variables as dummy variables (1/0 for presence/absence) and interpret the predictors as "the presence of this variable increases your predicted outcome by its beta". Your "Reality" variable with a beta of 2422.87 is suspect, despite a statistically significant p-value. This should be further evidence of using a different regression model. Using Poisson or Negative Binomial regression will have different interpretations of the betas though, so be careful.

3.) R-squared can be interpreted as "explaining __ % of the variability in the outcome variable". Your R-squared value is low, and with five predictor variables this is also highly suspect. R-squared should go up with each new predictor, so this shows that despite the predictors being statistically significant, they are not increasing the explanatory power of the model very much. Further evidence that this may be the incorrect model.

Normally, I would suggest doing some model diagnostics to help examine model fit. For linear regression, the residuals should be normally distributed. However, in your case I would suggest examining the distribution of your outcome variable. My gut tells me it is not normally distributed (as is required for linear regression), and follows a Poisson or Negative Binomial distribution. Perhaps you could examine and comment if you have more questions.

Not the answer you're looking for? Browse other questions tagged regression interpretation binary-data linear or ask your own question.