Breusch–Pagan test: what exactly is the z-variable

I want to perform a Breusch-Pagan-Test. I did calculate some very small examples following the procedure described below, just to understand what the test does: 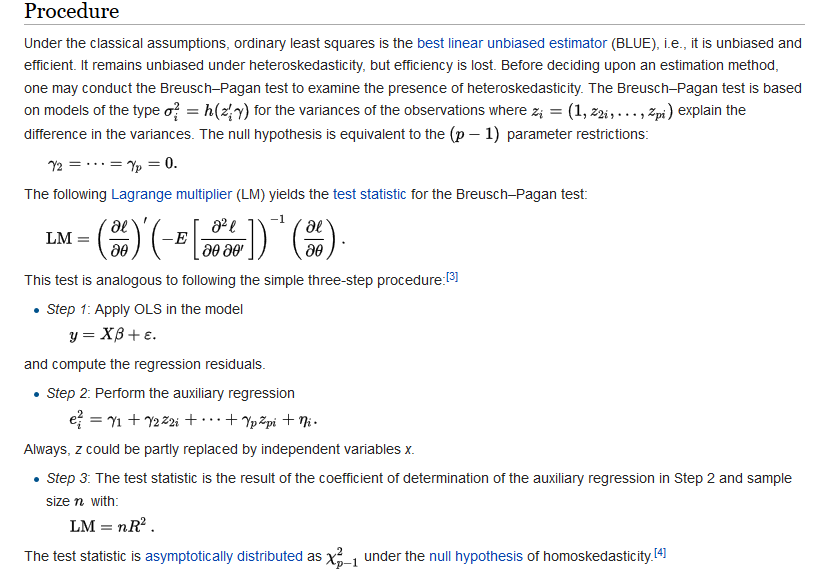 in Step 2: it is says, that "z could be partly replaced by independent variables x." Also in all hand-calculated examples I found z was just replaced by x. But can somone tell me in simple words what z really is? If it is x, why is it not named so, in the formulas?

Thanks for any help you can offer!

Imagine you believe that your residuals are heteroskedastic. It might be the case, then, that they can be represented by some kind of function on some variables. When the authors assume that $\sigma^{2}_{t}=h(z'_{t}\alpha)$, they are simply suggesting this structure, where $h$ is the function and $z'_{t}\alpha$ is a linear combination of variables.

Both $h$ and $z$ could be totally different things, but since it might be that the simplest assumptions you could make actually correspond to reality, it is smart to try them out first.

I've skipped a bunch of mathematical formality in this explanation, and since they are not complicated to understand, I strongly suggest you try and read the second page of the original paper: A Simple Test for Heteroscedasticity and Random Coefficient Variation.

Not the answer you're looking for? Browse other questions tagged hypothesis-testing heteroscedasticity breusch-pagan or ask your own question.