Going through this lecture note on bias-variance trade-off, I didn't follow the latter part of this paragraph.

It shows the common situation in practice that

(1) for simple models, the bias increases very quickly, while

(2) for complex models, the variance increases very quickly. Since the riskiness is additive in the two, the optimal complexity is somewhere in the middle. Note, however, that these properties do not follow from the bias-variance decomposition, and need not even be true.

The 'It' in the above paragraph refers to the below image: 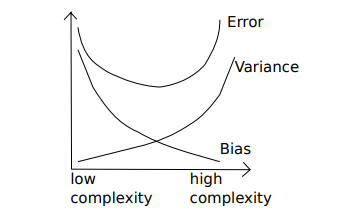 2) And, under what conditions are they not true?

In statistics and machine learning, the bias–variance tradeoff is the property of a set of predictive models whereby models with a lower bias in parameter estimation have a higher variance of the parameter estimates across samples, and vice versa.

And on bias-variance decomposition:

The bias–variance decomposition is a way of analyzing a learning algorithm's expected generalization error with respect to a particular problem as a sum of three terms, the bias, variance, and a quantity called the irreducible error, resulting from noise in the problem itself.

So, the property that has been referred to in the question --bias variance tradeoff -- is a property of a set of predictive models, in general. As noted by @whuber the image in the question is a way of demonstrating that property heuristically.

And, the bias-variance decomposition is a way to analyze the generalization error of an algorithm for a particular problem.

Not the answer you're looking for? Browse other questions tagged machine-learning self-study bias-variance-tradeoff or ask your own question.

2
Bias and Variance, Overfitting and Underfitting
5
Mean Squared Error as quantifier of the Bias-Variance tradeoff
2
What is the relationship between estimation error, approximation error, bias, variance in machine learning?
5
Bias-Variance decomposition: Expectations over what?
0
Bias-variance tradeoff question
6
Impossible to overfit when the data generating process is deterministic?