How to engineer a bimodal continuous feature for use in Decision Tree?

I have a predictor that exhibits "bimodal" behaviour. How can I engineer this feature to improve performance within a Decision Tree?

For an intuitive example, consider how a binary flag of "moves house in next 6 months?" may correlate with a continuous variable of "change in income over last month". This may yield a distribution like the following: 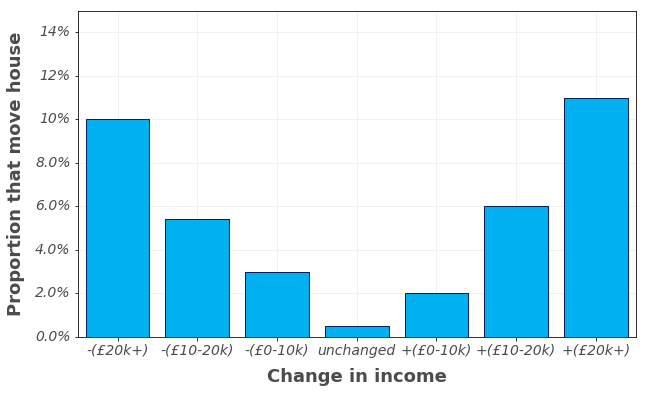 (continuous data has been binned; simulated to illustrate bimodal nature of data)

My trouble is that when using a Decision Tree (non-negotiable), cuts are applied on nodes to find the best value at which to split. However, due to the bimodal nature of the feature, the cuts cannot successfully split the data well enough.

Question: how can I engineer this feature to improve performance within a Decision Tree?

Take the absolute value of the feature. So instead of a feature of

With pandas, this can be done using df[feature].abs()

Note that this assumes the data is symmetric about $0$, i.e., the probability density function for $x>0$ is $f(x)$, and for $x<0$ is $f(-x)$; if this assumption is true, then this will make the data far more linearly separable than in its current form.

Not the answer you're looking for? Browse other questions tagged cart continuous-data feature-engineering bimodal or ask your own question.