Is it the case that β+power=1?

In psychology papers that do prospective power analyses (example), one often notices the convention of assuming β values (false negative rates) of 0.20, and power levels of 0.80. In other words (if I understand correctly), we are happy with a mere 80% chance of detecting true effects, and are happy to accept a whopping 20% chance of failing to detect such true effects.

Both values seem unacceptably low/high (respectively), which I was first tempted to cynically associate with claims about psychology not being a real science, namely on the low cost placed on finding false effects or on NOT finding true effects.

On second thought, however, it does stand to reason that the more you require of one criterion (e.g. low β), the more you necessarily have to compromise on the other (e.g. make do with a small power). In other words, that there be a trade-off between them.

I have trouble understanding however whether it is a coincidence that these two measures - in this case - add up to 1, and whether this has to be the case that β+power=1.

To be honest, I am not a big fan of the 2x2-table that is typically presented to explain the relationship between $\alpha$ and $\beta$ (or power, respectively) because it looks like the total sum of probabilities should be $100\%$ and does not acknowledge the total separation of the true status of $H_0$. So I'd rather present it the following way:

For a statistical test, you can imagine two scenarios: either the null hypothesis, which you are trying to reject, is actually true or is not true.

I agree with you that $\beta=20\%$ for many settings is way to high, since it corresponds to $20\%$ chance of the study to fail. If I were a PhD-student and the study that I will conduct and analyze for the next three years, I would definitely not want take the odds to go with only $80\%$ power ...

This is no coincidence, this is exactly how these measures are defined.

You are mixing notations and tables, the table above is a Table of error types, which is used in statistics and inference / hypothesis testing. True positive rate (TPR) aka Recall aka Sensitivity comes from a confusion matrix based on predictions. 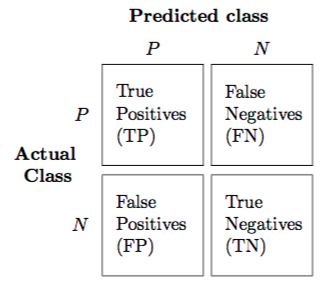 Not the answer you're looking for? Browse other questions tagged statistical-power false-positive-rate or ask your own question.