Is it possible for a variable that was proved to be significant from the two-sample t-test to have ROC curve that is close to or below the line x=y?

Say we have a large sample size for each of the two groups, so that the central limit theorem can be applied and thus t-test to compare the two groups means can be justified.

If such phenomenon is possible to take place, what can be the reason for it?

"Statistically significant" doesn't mean that the difference between the group is large, nor that is it relevant in any meaningful way. It only means that you can rule out that it happened by chance. This is especially true when you have a large number of observations: even tiny differences in mean can become very significant.

Let's take an example. Two samples of 10 000 000 randomly distributed observations, with a small difference in means:

Because of the sheer sample size, that's going to be very significantly different:

As you can see the means differ only on the third significant digit.

Because this difference is so small compared to the standard deviation, the predictive power is close to 0 as you can see with a ROC analysis: 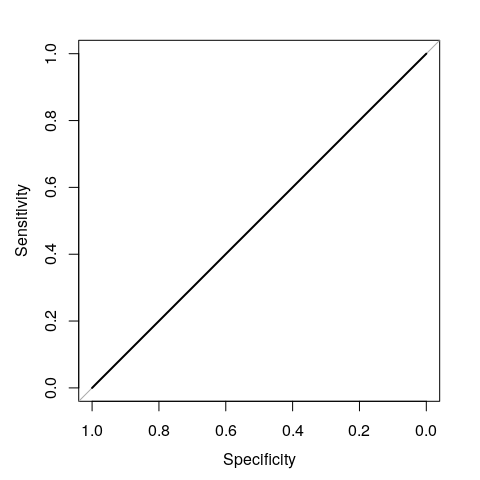 Regarding ROC curves below the diagonal line, this would indicate that your variable is performing worse than random. Usually this happens when you got the labels swapped.

Not the answer you're looking for? Browse other questions tagged regression t-test roc or ask your own question.

3
AUC values for different sets of features
1
Possible to have overlapping 95 CIs for two means but 95 CI for difference between the means does not include zero?
12
Statistical significance of difference between distances
5
What test should I use for two groups of different number of measurements and low number of samples?
1
Area Under the ROC Curve: Comparing identification performance between two values of the same variable
0
Kolmogorov Smirnoff test result vs paired t-test result
0
What's the right t-test for comparing the distribution of a response variable across two categories for the same sample?