Should ANOVA be used when the dependent variable is an integer, such as a count of items? [duplicate]

I have data for a dependent variable, DV, representing a count of objects, with a range from 0 to 6 (sample size 450), slightly left skewed with a mode at 4: 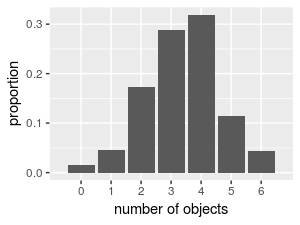 Furthermore, I have a single categorical variable with three groups. I wish to perform a test to determine whether to reject the null hypothesis that the mean (or some other location measure) of the number of objects is the same across the three groups. ANOVA was suggested to me, but I believe this would be incorrect. However, could someone please confirm or correct my argument for this position?

The argument posed to me by the other party was that the DV is approximately normal and ANOVA is fairly robust to some deviation from normality. I disagreed with this position for the following reasons:

So anyway, because of point (1) I would have to conclude that count data is ordinal-level and a Kruskal-Wallis test would be better suited for this situation. However, it seems wasteful to treat counts as only ordinal, as the integer intervals are equal and there is a zero... so in addition to confirming or rejecting my arguments, any suggestions for other tests are welcome :-)

Browse other questions tagged anova count-data kruskal-wallis or ask your own question.

6
Kruskal-Wallis test data considerations
6
What measure of effect size in ANOVA has mode at zero under the null (unlike $\eta^2$ that does not)?
0
kruskal wallis post hoc test for negative and positive values
0
converting to count dependent variable
4
Finding GLMMs that fit my count data for multiple datasets
1
Comparing heteroscedastic groups with sample sizes from 1 to 24… No valid tests?
0
Kruskal-Wallis test for Length vs Year test