How to determine the best relationship (linear, log, etc.) between input predictor variable(s) and output variable for multiple linear regression?

In some regression models I have seen, the author has had 10 predictors, and then changed the whole function from linear to log and ended up doubling the predictability (R^2 from ~40% to 80%). I'm fully aware that R^2 or adjusted R^2 isn't the best for determining the relationship but it is just for example.

One possibility (although "best" while popular in questions here is always a bit vague...) would be using Generalized additive models (GAM) which are of the form

with the definitions just as in Generalized Linear Models and $f_i(x_i)$ being functions estimated from the data. Basically the functional relationship of each predictors and the linked response get estimated.

In R you can use e.g., the gam, the mgcv and the gamlss packages to fit GAMs and variants.

An example would be to fit a GAM for the daily ozone measurements in New York, May to September 1973 explained by solar radiation, wind and temperature. Each predictor's functional relationship is estimated with nonparametric smoothing splines:

But perhaps it's best to plot the estimated functions

As you can see the functional relationship looks pretty different for all predictors and the functions are all non-linear. They are "best" in the sense of the fit criteria laid out in detail in e.g., the original paper. 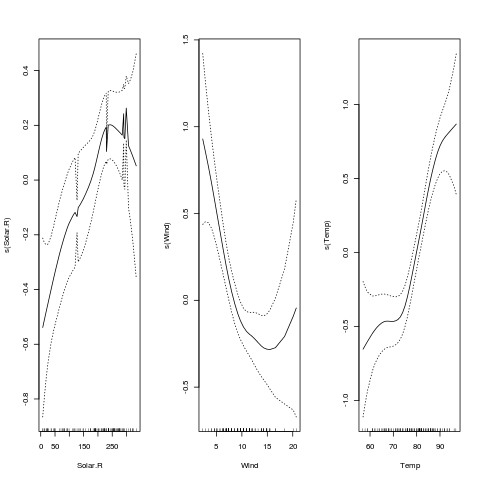 Not the answer you're looking for? Browse other questions tagged logistic multiple-regression linear-model or ask your own question.