A colleague of mine wishes to conduct a network meta-analysis of correlation coefficients for a set of imaging tests (eg ultrasound, computed tomography, magnetic resonance imaging, and so forth).

He has collected correlation coefficients (R), R-squared, and Fisher z. He pushes me to embark in a formal network meta-analysis (eg a frequentist one with the netmeta R package).

However, after some thoughts, I think it is a logical paradox, in the sense that in my opinion the transitivity assumption (see figure below) does not apply to correlation coefficients in the same fashion it applies to clinical trials with unambiguous endpoint definitions or to diagnostic test accuracy studies with clear labeling of healthy and diseased subjects. 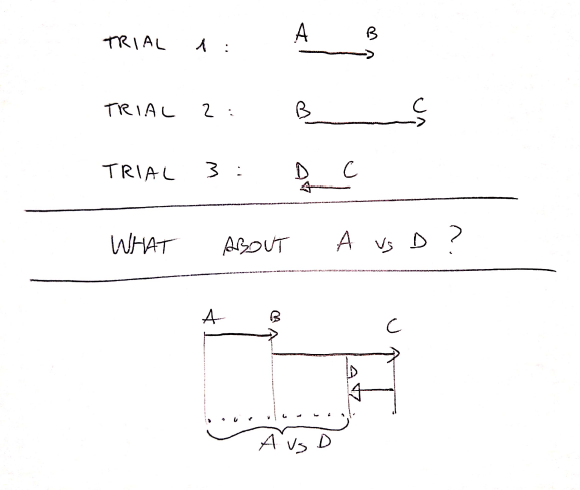 I have also searched in Google and PubMed for "network meta-analysis" and "correlation", but did not find any meaningful reference.

There are two points to comment on. Note that correlation coefficients do not measure differences, but agreement.

A pairwise meta-analysis of treatments effects (using effect measures such as the mean difference, the relative risk, or the odds ratio) involves the comparison of two groups, and therefore the natural extension is network meta-analysis involving more than two groups. Traditionally, this has been based on a contrast-based approach. The consistency assumption says that the direct evidence and the indirect evidence agree, formally:

A different thing would it be to compare correlation coefficients of two or more different studies by looking at their (transformed) differences, in analogy to comparing means, proportions or incidence rates. For such differences, a consistency assumption could be made (though I doubt that this would make much sense).

Not the answer you're looking for? Browse other questions tagged bayesian correlation meta-analysis network-meta-analysis diagnosis or ask your own question.