Linear regression when Y is bounded and discrete

When a response or outcome $Y$ is bounded, various questions arise in fitting a model, including the following:

A model should be chosen according to what works and knowledge of the underlying generating process. Whether the client or audience knows about particular model families may also guide practice.

Note that I am deliberately avoiding blanket judgments such as good/not good, appropriate/not appropriate, right/wrong. All models are approximations at best and which approximation appeals, or is good enough for a project, isn't so easy to predict. I typically favour logit models as first choice for bounded responses myself, but even that preference is based partly on habit (e.g. my avoiding probit models for no very good reason) and partly on where I will report results, usually to readerships that are, or should be, statistically well informed.

Your examples of discrete scales are for scores 1-100 (in assignments I mark, 0 is certainly possible!) or rankings 1-17. For scales like that, I would usually think of fitting continuous models to responses scaled to [0, 1]. There are, however, practitioners of ordinal regression models who would happily fit such models to scales with a fairly large number of discrete values. I am happy if they reply if they are so minded.

I work in health services research. We collect patient-reported outcomes, e.g. physical function or depressive symptoms, and they are frequently scored in the format you mentioned: a 0 to N scale generated by summing up all the individual questions in the scale.

The vast majority of the literature I've reviewed has just used a linear model (or a hierarchical linear model if the data stem from repeat observations). I've yet to see anyone use @NickCox's suggestion for a (fractional) logit model, although it is a perfectly plausible model.

Item response theory strikes me as another plausible statistical model to apply. This is where you assume some latent trait $\theta$ causes responses to the questions using a logistic or ordered logistic model. That inherently handles the issues of boundedness and possible non-linearity that Nick raised.

The graph below stems from my forthcoming dissertation work. This is where I fit a linear model (red) to a depressive symptom question score that's been converted to Z-scores, and an (explanatory) IRT model in blue to the same questions. Basically, the coefficients for both model are on the same scale (i.e. in standard deviations). There's actually a fair bit of agreement in the size of the coefficients. As Nick alluded to, all models are wrong. But the linear model may not be too wrong to use. 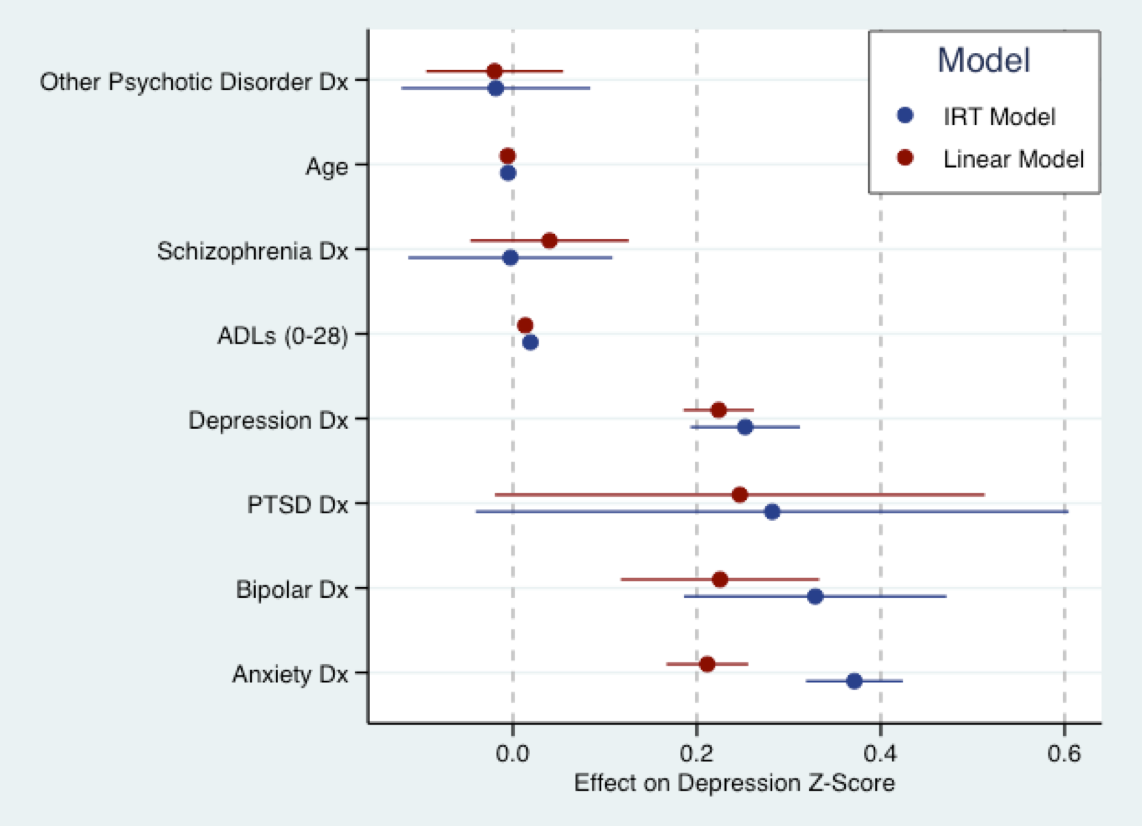 That said, a fundamental assumption of almost all current IRT models is that the trait in question is bipolar, i.e. its support is $-\infty$ to $\infty$. That's probably not true of depressive symptoms. Models for unipolar latent traits are still under development, and standard software can't fit them. A lot of the traits in health services research that we're interested in are likely to be unipolar, e.g. depressive symptoms, other aspects of psychopathology, patient satisfaction. So the IRT model may also be wrong as well.

Take a look at the predicted values and check if they have roughly the same distribution as the original Ys. If this is the case, linear regression is probably fine. and you will gain little by improving your model.

The violations of these assumptions are mitigated if the data tends to fall around the center of the range, away from the edges. But really, linear regression is not the optimal tool for this kind of data. Much better alternatives might be binomial regression, or poisson regression.

use a cdf (cumulative distribution function from statistics). if your model is y=xb+e, then change it to y=cdf(xb+e). You will need to rescale your dependent variable data to fall between 0 and 1. If it's positive numbers, divide by them max, and take your model predictions and multiply by the same number. Then go check the fit and see if the bounded predictions improve things.

You probably want to use a canned algorithm to take care of the statistics for you.

If the response only takes a few categories, you may be able to use classification methods or ordinal regression if your response variable is ordinal.

Not the answer you're looking for? Browse other questions tagged regression multiple-regression least-squares linear bounds or ask your own question.