I am analysing temporal population data on the amphipod Orchestia gammarellus. At several moments each year, all animals were collected from a small spot, and several life history traits were measured. For these traits, I want to know whether there are seasonality and/or trends. I have data since mid 2014.

In this example, I focus on the proportion of reproductively active females in each sample. This peaks every year around July, so I would expect to find seasonality.

The data have been collected irregularly, so I thought time series analysis to be inappropriate. Rather, I have read good things about Generalised Additive Models (GAMs), and am trying to use them in R. No luck so far (see below).

Animals are collected from the grazed salt marsh on the island of Schiermonnikoog, a barrier island in the north of the Netherlands. This is the western part of the salt marsh, which is grazed by cattle. The cattle eat primarily Elytrigia atherica, but shun the tougher Juncus gerardii. This creates patches of "high vegegation" J. gerardii habitat, in which the soil is loose, amidst a sea of "low vegetation" E. atherica habitat, where the soil is compacted by trampling.

In comparison, the eastern part of the salt marsh is ungrazed, and there are no mosaics of vegetation types. Here the soil is much looser, and densities of amphipods much higher.

Like isopods, amphipods have a brood pouch in which the juveniles, and are live-bearing.

One of the variables I want to look into is the proportion of fully reproductive females in the samples, for which I want to know whether there are seasonality and trend. Here are the data:

As can be seen in the figure below, reproductively active females are abundant in summer but absent in winter. 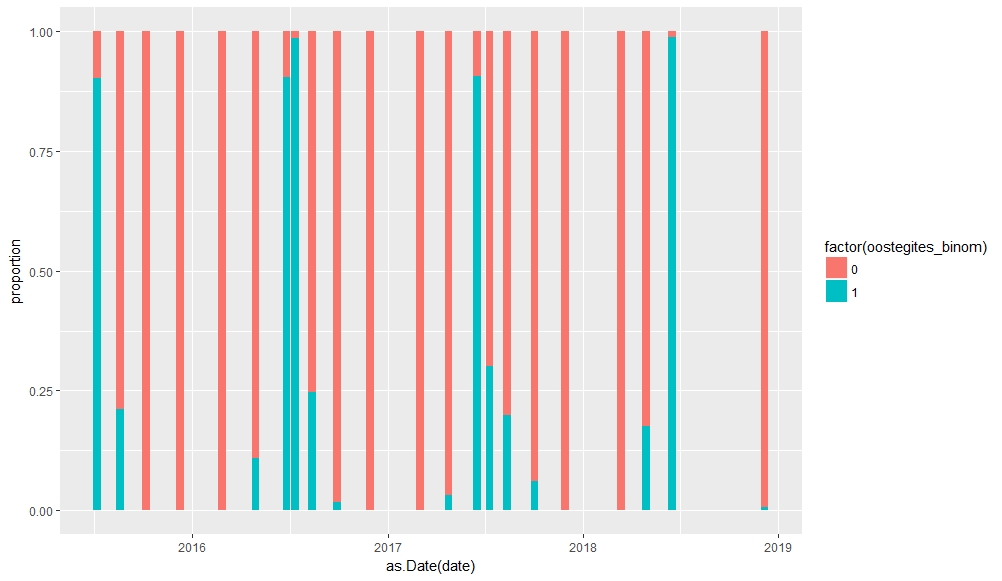 Were it a generalised linear model, I would create separate variables of year and month, and create the following model:

where weight is the number of individuals that make up each proportion.

With a generalised additive model, I would expect to create a similar model, where in this case there would be clear seasonality but no clear trend.

I have been looking at the gam package and the prophet package, but they seem to operate on single data points per date.

One way to do this with a GAM is to set up a model that decompose time into different components. In this case, you want a seasonal component, potentially a trend even if the data don't seem to have one, and then some remainder, which we will assume for now is independent noise such that given the model we have random draws from a binomial distribution with expectation given by the fitted values of the model.

Here is one way to achieve this using mgcv.

First you need to convert the date variable into something useful; initially a Date classed object and then we process that to get information about the day of year (week of year would also work), the year, which we also cast as a factor for one of the models we'll look at.

Of these three, there is a clear preference for m2:

but there are some issues with that model that a proper analysis might try to tackle.

You can also model the trend as a s(Date), but that won't decompose the data into seasonal effects plus change between years, and you'll need to increase k to get a flexible enough spline to model all the data in a single shot.

Not the answer you're looking for? Browse other questions tagged r binomial proportion gam unevenly-spaced-time-series or ask your own question.