I am interested in looking at the relationship between plant productivity, temperature change and plant biomass change.

I have run a linear model in R using the below equation for this with plant productivity as an interaction term.

The interaction is statistically significant (p-value = <0.01). I have plotted the estimated coefficient for temperature change from model above against the plant biomass figures and wanted to check I'm interpreting it right! 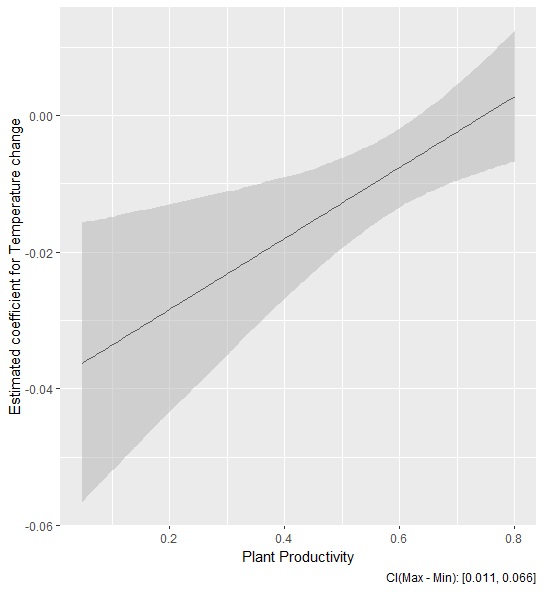 I think (hope) the plot tells me how the effect of temperature on biomass change changes as productivity changes.

The graph shows me the temperature coefficient becomes less negative as plant productivity increases. I interpret this to mean that temperature has a negative effect on the biomass change in plants with lower productivity.

Is my interpretation correct?

That interpretation seems correct and that's an interesting way to graph it.

What I usually do is have one IV on the x axis, the DV on the y axis and several lines for the other IV. Then I make the same plot with the IVs switched. That might be more interpretable.

Because the model includes an interaction term, the effect of plant productivity on expected plant biomass change actually depends on temperature change. You can see this by re-arranging the above equation:

The intercept and slopes describing the relationship between plant productivity are given by:

For example, if the temperature change is zero degrees (Celsius?), then:

As Peter suggested, you can choose several representative values for temperature change and then plot the corresponding lines obtained by substituting those representative values in the expressions of the above Intercept and Slope. Those lines would describe how the expected plant biomass change varies as a function of plant productivity.

Plotting lines with different intercepts and slopes would allow you to see how the effect of plant productivity on expected plant biomass change depends on particular, representative values of temperature change. It's possible that some slopes will be positive, while others will be negative. In that case, you can note that the effect changes direction, etc.

If I understand @gung correctly, I think what you did was to re-express the first equation I wrote like so:

Not the answer you're looking for? Browse other questions tagged r regression interaction or ask your own question.