How does the Metropolis Algorithm “get off the ground”?

I'm thoroughly confused by the Metropolis Algorithm as defined in Casella and Berger's Statistical Inference. Namely, here's the definition (p.254):

The confusion stems from a misunderstanding of the notation $$V \sim f_V$$ which means both (a) $V$ is a random variable with density $f_V$ and (b) $V$ is created by a PRNG algorithm that reproduces a generation of a random variable with density $f_V$. Each time a generation $V_i\sim f_V$ occurs in the algorithm from Casella and Berger, a new realisation of a random variable with density $f_V$ occurs, which is independent from all previous realisations, hence different from these previous realisations. (Setting aside discussions about the pseudo-randomness of these generators and the resulting approximation in the independence statement.) Equivalently, stating that the $𝑉_𝑖$'s are all identically distributed from the same distribution $𝑓_𝑉$ does not mean that their realisations all are numerically identical. 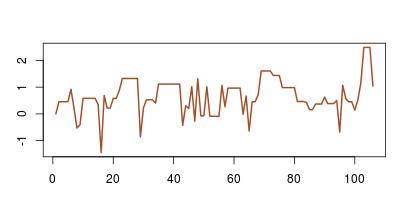 As a last remark, the only potentially confusing part in the description of Casella and Berger is the very first sentence where the random variables $Y$ and $V$ are not needed. It could have been clearer to state "Let $f_Y$ and $f_V$ be two densities with common support."

Not the answer you're looking for? Browse other questions tagged mcmc markov-process random-generation metropolis-hastings accept-reject or ask your own question.