Can I guess which time series model (ARIMA, SARIMA) I should use just by looking at the time series plot? 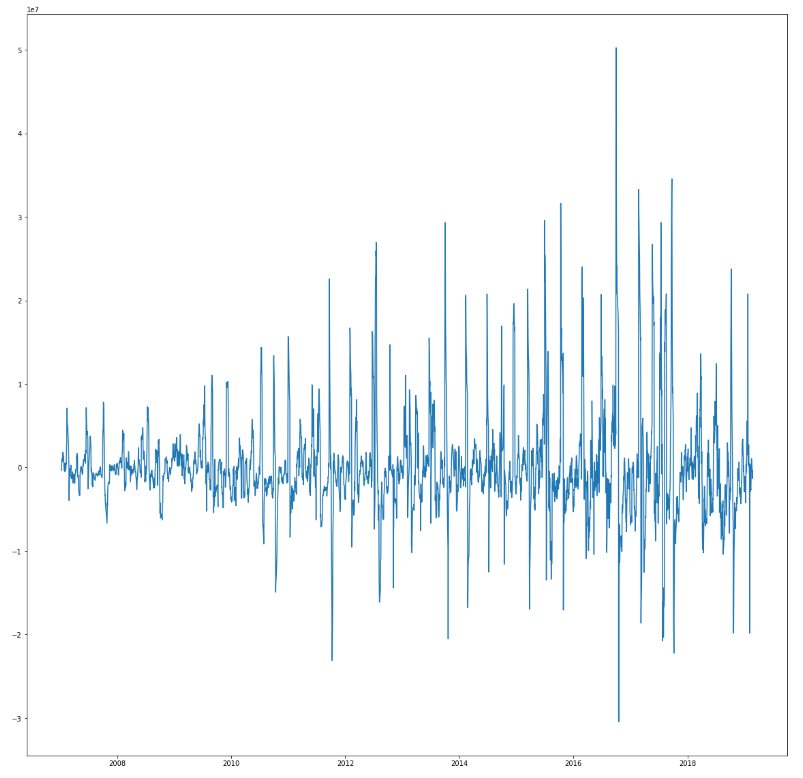 I have the time series plot shown above. Is is possible to know which model I should use solely by looking at this plot?

In order to make a good model-selection you should always do some statistical tests and evaluate the accuracy of your model with a training and a test set (or via forward chaining, because cross-validation is not possible in time series.

1. Basics of the time series

According to your plot you have a univariate time series with ~13 years of data (from 2007 to 2019). However I do not know the frequency of your data. Do you have monthly or weekly or even daily observations? ARIMA and SARIMA are often good models for monthly data. Nonetheless in time series with weekly and daily and hourly seasonalities you face distinct problems. There might exist multiple seasonalities and uneven numbers of seasons per year (a year has ~52,1429 weeks). In this case you should rather stick to a tbats model.

Your data apparently has no underlying trend. That makes model selection easier.

The variance of your data is increasing over time. As far as I know increasing variance cannot be captured with a standard ARIMA model.

Until 2017 the variance of your data is steadily increasing, but then the variance gets suddenly very small. This can be either due to noise (and lack of data after 2017) or due to a structural change. If it is just noise an ARIMA/SARIMA model can be appropriate, but ARIMA and SARIMA cannot deal with structural breaks.

You obviously have a certain type of seasonality. Once per year you have a very high number and the subsequent number is far below the average. Therefore I would stick to a model which takes seasonalities into account, e.g. SARIMA.

First step in time series modelling is the visual inspection. Eye can see things a model can't necessarily see (but be aware: may also see things of no existence).

Hence what can our eye definitely see? Mean does no seem to change. The process seems to be zero-mean, hence there is no unit root. We can also see that the process is too erratic to be Gaussian. It is time series driven by (mildly) fat tailed noise (like a t-student 3 degrees of freedom). And correlations seem to be compatible to some ARMA models. It could be an ARMA(2,2) driven by t-noise. But we can't definitely know that just by visual inspection.

Hence note, even though the eye can reject classes of models and speculate, it can not estimate and run diagnostics. You can attempt and fit what you may think are the most likely models (and avoid fitting unlikely ones) but statistical estimation and diagnostics is what would allow you get to a model closer (in certain respect at least) to the data generating process.

The mean clearly shifts at the end of 2009 to a lower mean .

Model error variance increases at about the same time suggesting the need for weighted estimation. see Negative values in time series forecast and high fluctuations in input data AND
How to improve this time series model? improve-this-time-series-model/396423#396423

Seasonal Pulses or Pulses seem to emerge in 2011 . Would have to actually have the data to diagnose which.

There may also be a change in parameters over time detectable by the CHOW test for constancy of ALL parameters in the model https://en.wikipedia.org/wiki/Chow_test NOT just the mean as is implemented in the free R program.

Not the answer you're looking for? Browse other questions tagged time-series data-visualization arima model-selection seasonality or ask your own question.

202
When (and why) should you take the log of a distribution (of numbers)?
1
Negative values in time series forecast and high fluctuations in input data
5
How to improve this time series model?