I'd like a clarification about the Cox proportional hazard coefficients reported on this page. For example, doesn't the hazard ratio (HR) for gender in that analysis of 0.41 (rounded from 0.407) mean that being female reduces the hazard of experiencing an end point by 59% compared to being male, (1-0.41) x 100? And doesn't the inverse of that HR, 2.46, mean that being male increase the probability of experiencing an end point by a factor of 2.46? Maybe I am wrong, but I am trying to understand how to interpret these coefficients.

Your understanding is a useful approximation in some circumstances, but it doesn't hold in general. It depends on what you mean by "the hazard of experiencing an end point." Survival analysis examines how quickly events occur, not simply whether they occur.

The value of $exp(\beta_i)$ reported after Cox modeling is the instantaneous hazard ratio (HR) associated with covariate $i$ for individuals at risk for the event. Under the proportional hazards (PH) assumption of Cox regression, any HR is constant over time (even if the value of the covariate has been changing over time). In other words, at any time $t$, the HR between 2 groups represents the relative risk of an event occurring in a short period of time around $t$ among those in the 2 groups who are still at risk.

So if you are restricting your interest to a short period of time around any particular time, your interpretation of the "hazard of experiencing an endpoint" for gender on the page you linked* is a useful approximation. The HR of 0.41 is the ratio of the risk of the event for women versus men over any short period of time. And in that case you are correct that the reciprocal of that HR, 2.46, is the corresponding ratio for men versus women.

But things get complicated over longer periods of time; after all, "In the long run we are all dead" and experience that event. This paper goes into details showing that a HR does not readily translate into relative risk, expressed in that paper as the relative risk reduction.

What's going on is that the relative numbers at risk in the 2 groups are changing over time even if the HR is constant. In your example, even if you started with equal numbers of men and women, at later points in time there will be fewer men than women still at risk. At a sufficiently late time there will be many more women than men at risk. So even if the HR of 0.41 still favors women over men among those at risk, the number of events among women around later times $t$ will eventually start to exceed those among men until all men and women have had the event.

The plot below shows how the cumulative relative risk (RR, ratio of numbers of events in two groups, starting with equal numbers at $t=0$) changes as time goes on. This is for exponential survival in the reference group and HR values of 1.5, 2, 3, and 4. The x-axis has been transformed to represent the event probability in the reference group, from 0 at $t=0$ to 1 at infinite time. In the limit of $t=0$, each RR defined this way equals the HR. As the probability of an event in the reference group increases, these RR values drop well below the corresponding HR and all end up at 1. 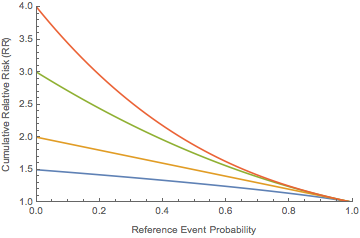 Not the answer you're looking for? Browse other questions tagged cox-model hazard ratio or ask your own question.

18
How do I interpret Exp(B) in Cox regression?
2
How to interpret hazard ratios for a cox model with 100% failure rate