Ask Question
Asked 2 years, 2 months ago
Active 2 years, 2 months ago
Viewed 4k times
5
$\begingroup$
This question already has answers here:
In linear regression, when is it appropriate to use the log of an independent variable instead of the actual values? (8 answers)
Regression: Transforming Variables (2 answers)
Box-Cox like transformation for independent variables? (3 answers)
When (and why) should you take the log of a distribution (of numbers)? (4 answers)
Closed 2 years ago.

I’m taking an online “Intro to AI” course for which I’m doing some azure machine learning labs. This course is largely about how to apply azure ML solutions and, while there is an “essential math for ML module”, it doesn’t do any sort of deep dive into the math/statistics. But I want to understand what’s happening mathematically to a basic level. (I've taken an intro to statistics, that's it so far.) Below are some details about some specific things I’d like to understand more, and my specific questions.

At a particular point in the “training a classification model” lab, there is this text: “The distribution of the Age column in the diabetes.csv dataset is skewed because most patients are in the youngest age bracket. Creating a version of this feature that uses a natural log transformation can help create a more linear relationship between Age and other features, and improve the ability to predict the Diabetic label. This kind of feature engineering as it’s called is common in machine learning data preparation.”

Then the instructions show you how to use Azure ML Studio to apply the natural log operation to the age column in the data set: 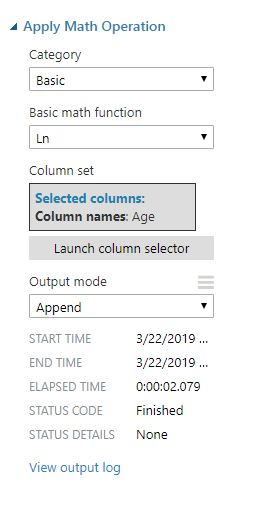 And after doing that, the data includes the original/raw age data and the transformed age data: 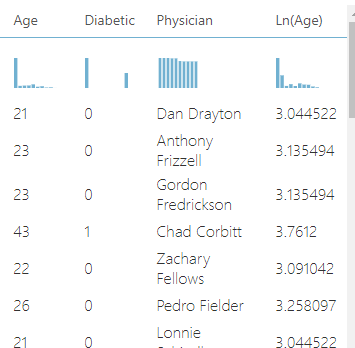 Question #1: What is that transformation actually doing? I don't mean the nitty gritty math, but what is it doing conceptually?

I don’t understand why any of that is necessary. I’ve broken my question down:

Could someone help with information for those whys, or point me to material that would help?

There's a lot here to break down. I hate to say it, but some of the advice in your course is quite misguided and wrong.

What is that transformation actually doing? I don't mean the nitty gritty math, but what is it doing conceptually?

The math here is pretty simple. You have a bunch of measurements of people's age that you would like to use as a feature in predicting some other measurement (looks like the probability of something happening). You're simply creating a new feature which is the logarithm of the original feature. I'll explain why you would want to do this below.

For linear and logistic regression, for example, you ideally want to make sure that: the relationship between input variables and output variables is approximately linear – why?

Here, the $\beta_i$'s are just numbers, and the job of the algorithm is to determine what numbers work best.

Notice that if you vary one of the $x$'s, and look at how the output $y$ changes as a result, you'll get a line. This is a direct consequence of the way the linear regression model works. If you want it to give you sensible results, then you need to make sure this drawing lines assumption is at least approximately true.

the input variables are approximately normal in distribution- why?

This is what I meant by the advice the course being misguided. You don't transform input variables because their distribution is skew, you transform them so that the linear shape the model is trying to draw through your data is reasonable

For example, here is a scatterplot I found online of a country's GDP vs. its average life expectancy (attribution is in the image): 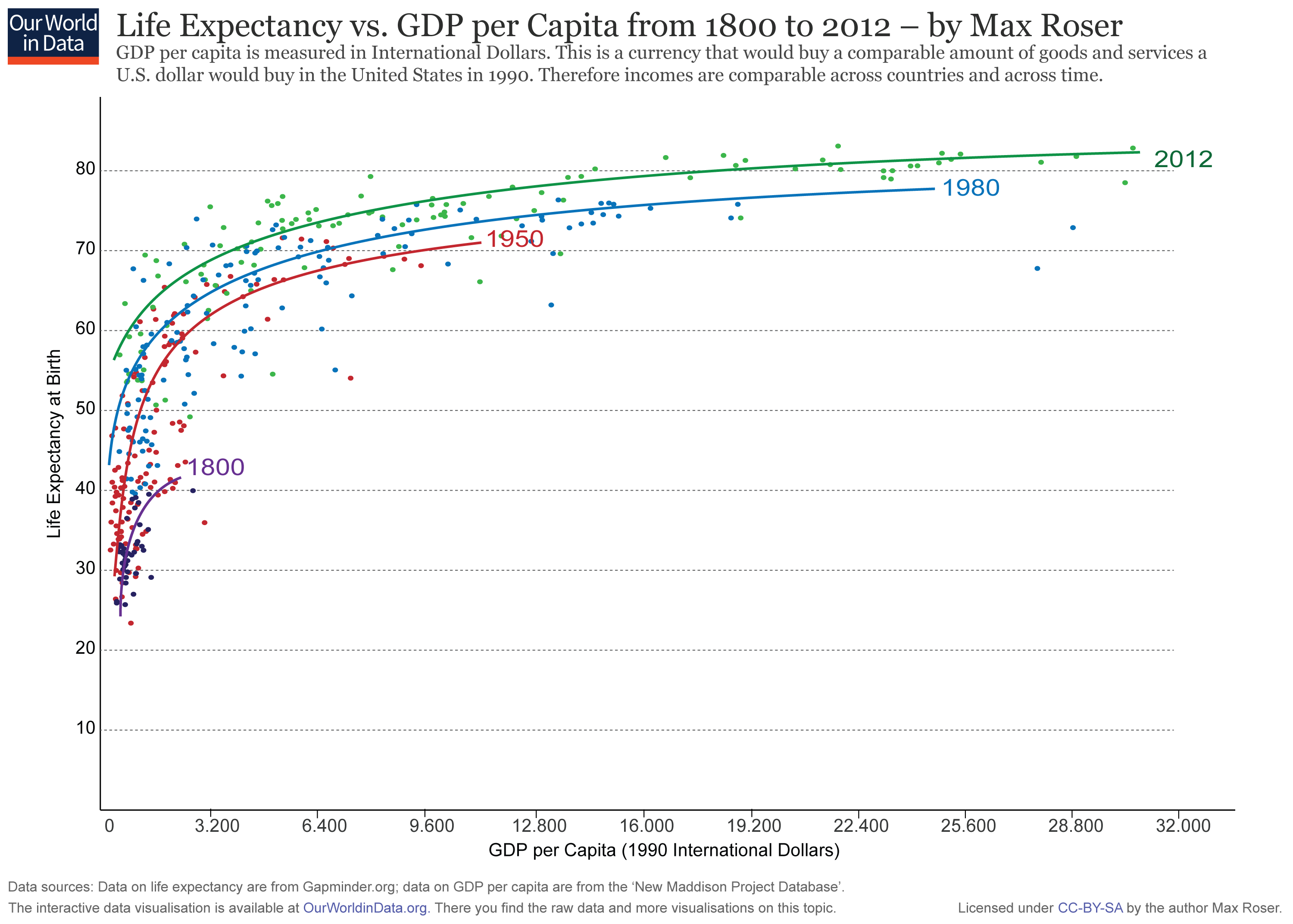 Clearly, drawing a line through the scatter plot is completely unreasonable, so the linear regression equation:

is a bad choice for the data. On the other hand, it looks like a logarithmic relationship is reasonable, so something like:

looks like it would work a lot better. This is the type of situation where transforming the GDP measurements with a logarithm is a good idea. But it has nothing to do with the distribution of GDP. You can't tell it's a good idea by drawing a histogram of GDP, it's about the relationship between GDP and life expectancy.

This is a deeper issue of a different nature than the others. For prediction models, it doesn't really matter, so if you're focusing on learning to build good predictive models don't worry about it for now.

As a summary, this assumption is intended to support the computation of the sampling distribution of parameter estimates. For example, if you want to say something like "the probability that I would collect data in which the relationship between log(GDP) and Life Expectancy is greater than what I actually observed, even when the there is truly no relationship, is very, very small" you need to be able to compute the sampling distribution of the parameter estimates. There are various assumptions that allow this to be done, and this constant variance assumption is one them.

That said, if you're only trying to make predictions, this isn't really relevant. And in no case is the distribution of the input data assumed to be normal, that's just a misconception.

Not the answer you're looking for? Browse other questions tagged regression linear logarithm or ask your own question.

7
Back-transformation and interpretation of $\log(X+1)$ estimates in multiple linear regression
1
Transformation between log and reciprocal powers for regression
0
using logit transformation properly in linear model and problems with model given zero F and p values for specific variable combinations
3
Transformed data due to non-normal residuals - how to see if it actually improved the model?
0
Reasoning for tranforming linear model to log-level
4
% coefficient of variation (%CV) for log-linear and log-log regression (calibrations)