(How) can “de-meaning” help me solve this “clustering” issue?

I'm not particularly advanced when it comes to statistics and data analysis and have a problem I can't seem to solve. Basically, suppose you're doing school research and have three groups (to which student participants have been randomly assigned) - a control group, and two experimental groups. Your whole participant pool is say 27 students (tiny I know, but helps with the example) 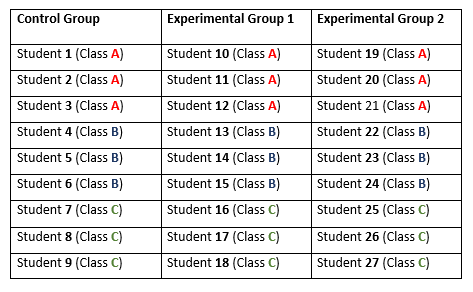 Now I get that there's a problem here and that the problem is one of "clustered data." One solution that has been suggested to me is "de-meaning" for each class, in other words:

Now the means of each class become 0 and there are no longer any "between class" differences. This (apparently) gets rid of the clustering problem. You might end up with a set of data that looks like this: 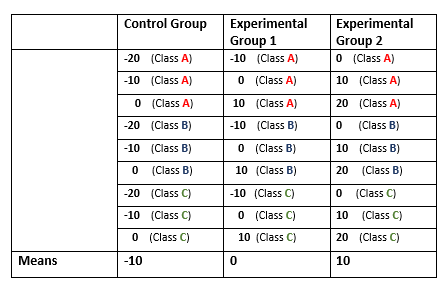 My first question is: is this a good solution to the problem?

My second question is essentially: what do you do next?

I'm assuming you could now just run a normal one-way ANOVA on the data, just as you would have done with the "raw" data if there hadn't been any clustering.

But I've gathered from posts elsewhere that you have to "correct the degrees of freedom" or something like that, because you've "used up" some of them in estimating the means for each class. Can somebody explain this?

Thanks so much for your help! Really appreciate it as this is doing my head in,

Browse other questions tagged clustering fixed-effects-model degrees-of-freedom clustered-standard-errors or ask your own question.

11
Clustering as a means of splitting up data for logistic regression
7
How to statistically test whether there is any nesting effect in the data?
0
How can one evaluate Incremental Clustering Algorithms, in particular the goodness of the clusters formed?
0
How to map clustering results to known groups?
33
How would PCA help with a k-means clustering analysis?
2
How to measure clustering quality when true clusters are known?