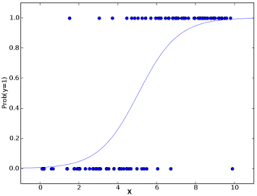 I have seen this post, this is not a question about whether or not binary logistic regression can be carried out using categorical predictors.

What I'm interested in is how to explain the use of the logistic curve in this model, as there doesn't seem to be a clear way like there is for a continuous predictor.

data that has been used for this simulation 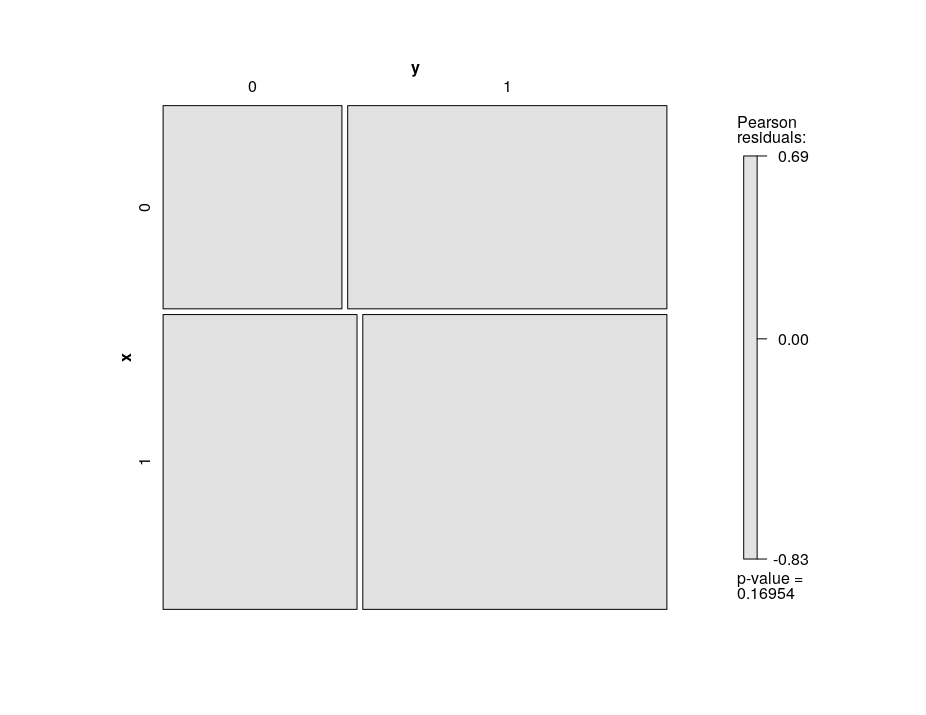 This is an attempt to plot the logistic curve when there is on binary predictor. The straight line is a linear regression whereas the curve is that of the binomial logistic regression 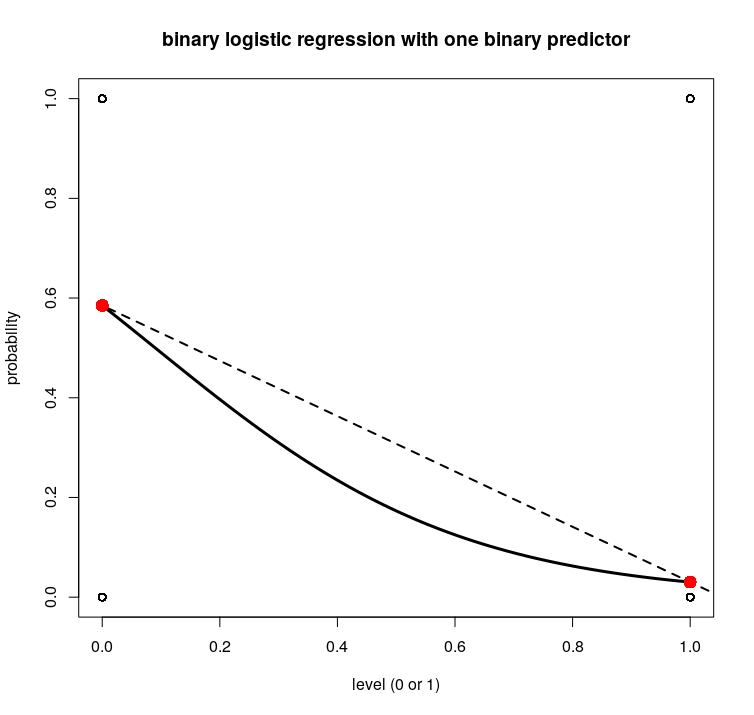 (messy) code for the above image :

A binary logistic regression model with continuous predictor variable $x$ has the form:

According to this model, the continuous predictor variable $x$ has a linear effect on the log odds that the binary response variable $y$ is equal to 1 (rather than 0).

One can easily show this model to be equivalent to the following model:

In the equivalent model, the continuous predictor $x$ has a nonlinear effect on the probability that $y = 1$.

In the plot that you shared, the S-shaped blue curve is obtained by plotting the right hand side of equation (B) above as a function of $x$ and shows how the probability that $y = 1$ increases (nonlinearly) as the values of $x$ increase.

If your x variable were a categorical predictor with, say, $2$ categories, then it would be coded via a dummy variable $x$ in your model, such that x = 0 for the first (or reference) category and $x = 1$ for the second (or non-reference) category. In that case, your binary logistic regression model would still be expressed as in equation (B). However, since $x$ is a dummy variable, the model would be simplified as:

The equations (C1) and (C2) can be further manipulated and re-expressed as:

What Is the Utility of a Binary Logistic Regression with a Categorical Predictor with Two Categories?

So what is the utility of the binary logistic regression when $x$ is a dummy variable?

There are no more curves in this plot as you are just estimating two distinct probabilities.

If you wanted to, you could connect these estimated probabilities with a straight line to indicate whether the estimated probability that $y = 1$ increases or decreases when you move from $x = 0$ to $x = 1$. Of course, you could also jitter the zeroes and ones shown in the plot to avoid plotting them right on top of each other.

What Is the Utility of a Binary Logistic Regression with a Categorical Predictor with More Than Two Categories?

If your categorical predictor variable $x$ has $k$ categories, where $k > 2$, then your model would include $k - 1$ dummy variables and could be written to make it clear that it estimates $k$ distinct probabilities that $y = 1$ (one for each category of $x$). You could visualize the estimated probabilities by extending the plot shown above to incorporate $k$ categories for $x$. For example, if $k = 3$, the plot would look like this:

where 1st, 2nd and 3rd refer to the first, second and third category of the categorical predictor variable $x$.

Note that the effects package in R will create plots similar to what I suggested here, except that the plots will NOT show the observed values of $y$ corresponding to each category of $x$ and will display uncertainty intervals (i.e., 95% confidence intervals) around the plotted (estimated) probabilities. Simply use these commands:

For the data in your post, this would be:

The resulting plot can be seen at https://m.imgur.com/klwame5.

First, you could make a graph like that with a categorical x. It's true that that curve would not make much sense, but ...so? You could say similar things about curves used in evaluating linear regression.

Second, you can look at crosstabulations, this is especially useful for comparing the DV to a single categorical IV (which is what your plot above does, for a continuous IV). A more graphical way to look at this is a mosaic plot.

Third, it gets more interesting when you look at multiple IVs. A mosaic plot can handle two IVs pretty easily, but they get messy with more. If there are not a great many variables or levels, you can get the predicted probablity for every combination.

Not the answer you're looking for? Browse other questions tagged machine-learning logistic binary-data logistic-curve or ask your own question.

1
Logistic regression with only categorical predictors