I am supposed to show the hazard ratio (HR) stratified by gender (1= female vs. 2= male) and age groups (quartiles, 1-4)*. The combination "female" and "first quartile of age" is supposed to be the reference, i.e. having a HR of 1. 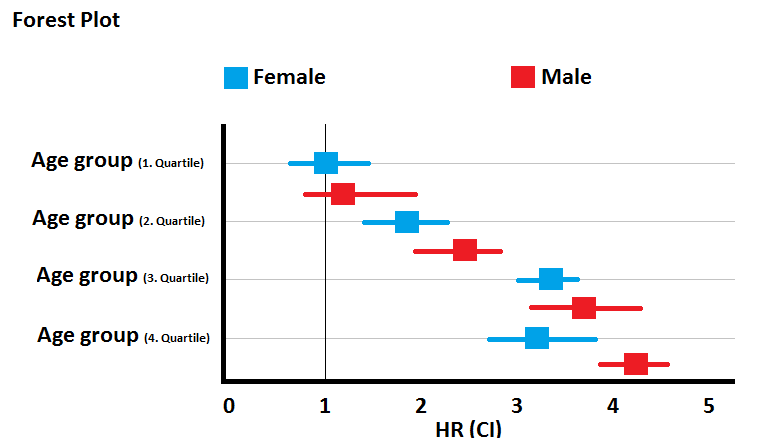 Since every group combination (2nd quartile and female, 1st quartile and male,...) is supposed to show the HR in comparison to the refernce (female and 1st quartile of age group), I am wondering whether I can firstly code both variables as one joint variable and afterwards make dummy variables (D1- D7) out of it like that:

My idea is to use those dummy variables as predictors in a Cox model. The interpretation of HR= 2 for D7, for example, would be something like "Being old (4th quartile) and male is associated with a twofold risk of mortality versus being young (first quartile) and female". Is this a valid approach? I haven't read about cases where a joint dummy coding was used for two different variables and can't find any resource online.

* Notice to the usage of age groups: I know that there are problems associated with splitting up a continuous variable in groups, but this is what I am supposed to do.

The joint variable of two factors is their interaction (and that is what you have hand-coded in D1,..., D7.) In R, if Gender and Age are the two factors, this can be done as in the code snippet below:

Then to make the interactions variable:

and now you can compare with your manually constructed variable. See also https://stackoverflow.com/questions/2080774/generating-interaction-variables-in-r-dataframes. This way we have constructed the dummies for the interaction. Maybe more useful, we can also construct a new factor variable which codes the interaction. This is simple:

and now D can be used directly in formulas.

As for questions in comments: Yes, you can use the 7 dummies. But logically, the variable is represented by the full set of 8 dummies, and sometimes we want them all. If I replace my code above ~ (Gender:Age) - 1 with ~ (Gender:Age) then (try it) you will get the 7 dummies, but you will also get the intercept, which was omitted by my code (that is what -1 does.) See What algorithms need feature scaling, beside from SVM? for a case where you do not want to drop one dummy!

32
What algorithms need feature scaling, beside from SVM?
2
How to calculate treatment effect and its confidence interval for subgroups in a clinical trial using Cox regression models