Is the panel (PLM in R) approach appropriate when observations within panels vary in location and number between time steps?

Setup: We have 10 connected but distinct wetlands within a study area. The wetlands are not totally independent, there is some exchange of water and organisms between them. Perhaps comparable to states or provinces - sharing borders and with some connections but largely self-governing.

We have collected 21 years of annual data. Each year 65 sites are chosen randomly from within the entire study area, resulting in 2-16 observations within each wetland (panel) per year.

Can I treat each of the 10 wetlands as a "panel" to identify the strongest potential drivers of change over time? I am using the PLM function in R which wont allow varying numbers of observations per time step...at least I can't figure out how to make that happen. ?? Is there a way of using the individual observations within each panel in PLM? Another option?

My main goal is to determine which of 3 predictors is driving a very strong overall decrease in CLARITY over time. This decrease and changes in the predictors differ between panels (see attached figure for an example).

The basic code is:

When I average values within each panel (so each panel contains only 1 "average" individual) I get results that make perfect sense, but I am losing or ignoring a lot of potentially important variation. I know it's not correct, but here are the (partial) results:

If I try to include all observations I get the following error message, which is clear enough. 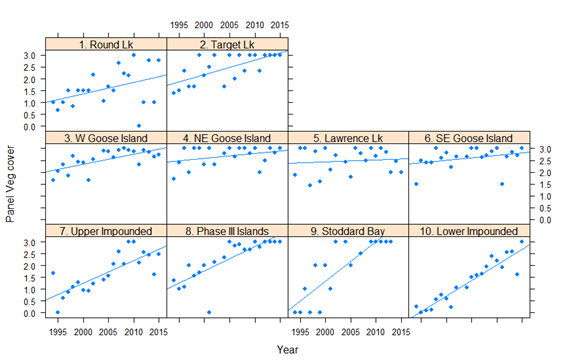 Thanks for any ideas.

It is not statistically wrong to estimate the model you have in mind if you think it is realistic. Remember, the "within" estimation for panel data just means you are assuming there is a separate intercept for each group of observations with the same id variable. If it makes sense in your context, there is no reason not to assume the baseline clarity should be the same for different sites within a complex. However, you cannot estimate this model with PLM. Instead, estimate the model using OLS with dummy variables:

This sounds like a case where a mixed effect model, with a random effect for wetland, would be appropriate. Random effect groupings can have multiple observations per grouping level, and are straightforwardly estimated using software like lme4.

would estimate a single linear relationship for vegetation, fish, and inputs with clarity across all lakes, and a separate intercept for each wetland (the (1|complex) term) and for each wetland in each year (the (1|complex:year) term). While I'm not an expert on panel models, from what I understand from the plm vignette this would be similar to a model="random" plm model. The model="within" version, where the relationship between each predictor term and the outcome variable is assumed to vary between wetlands, can be modelled with:

Although in that case, I would really recommend a varying slopes random effect model, like:

Not the answer you're looking for? Browse other questions tagged panel-data longitudinal-data-analysis or ask your own question.