"If Kaplan-Meier plots cross each other then proportional hazard assumption does not hold". The issue I am facing is that I got the Kaplam-Meier plot(bleow). We can clearly see that it is overlapping. But when I plot the Schoenfled residual plots, it suggests otherwise because the black solid line is flat(image below). Also the p-values(below) for Schoenfled residual plots are not significant, suggesting that proportional hazard assumption holds 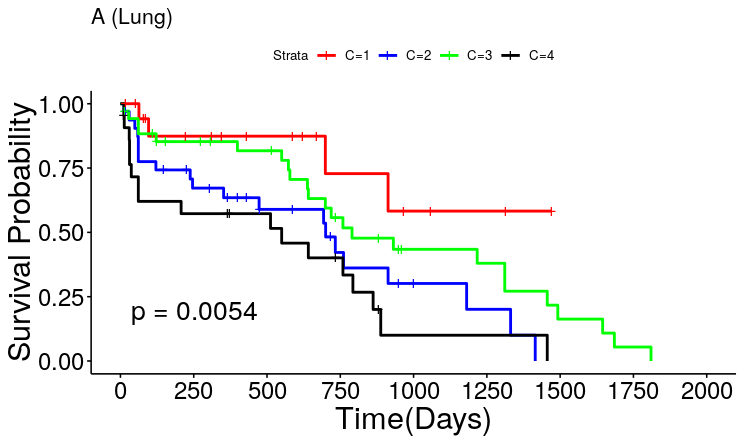 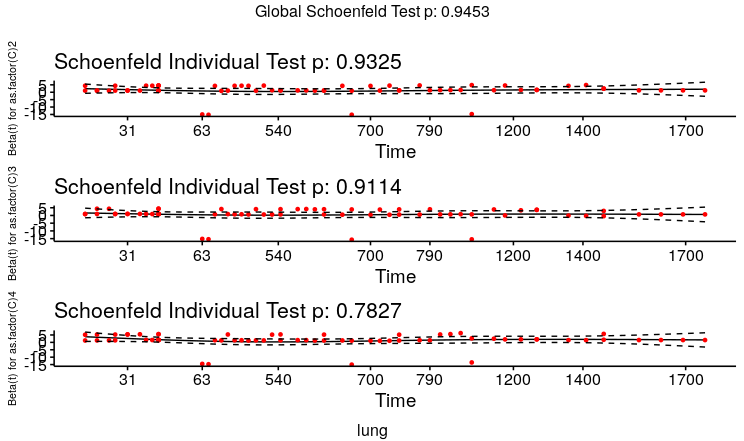 It’s not clear that the overlaps among the K-M curves are so bad. There might be some crossing at very early times and curves come close to each other at some later times but that type of variability might not be inconsistent with proportional hazards.

In this example I would say that the hazards are not perfectly proportional which can be seen in the kaplan meier plots. But this is not a significant violation of the assumption judged by the schoenfeld test. The problem may arise if one strictly follows the scentence you quoted "If Kaplan-Meier plots cross each other then proportional hazard assumption does not hold" which I would question because sometimes there may be "a little" scrossing like here what not means that proportional assumption must be wrong. If this were true there would be no need for a significance test like the schoenfeld test.

Not the answer you're looking for? Browse other questions tagged cox-model kaplan-meier proportional-hazards schoenfeld-residuals or ask your own question.

8
Violation of Cox Proportional Hazards by a continuous variable
1
Assessing Proportional Hazards Assumption of a Cox Model with Caseweights
1
How does time factor into Cox regression or a Cox proportional hazards model?
2
Why are Kaplan-Meier curves crossing when Cox PH assumption is not violated (Global Shoenfeld non-significant)?
1
Hazard ratio for more than two groups
1
What are the hazard ratios in this plot referring to?