Why is my sample size so big after doing pwr.t.test() in R?

For a research I want to do a t-test between two populations. Since I have a fairly small sample size I want to calculate the necessary sample-size for getting a good power (0.8 is supposed to be very good).

I did calculation as below in R using the pwr.t.test() form the package "pwr". It uses Cohen's d, sample size, significance level and power, i.e. three of these to determine the fourth.

In the end-effect I obtained a sample size of 54821.11 using the function an the Cohen's d obtained.

I have four samples in a bad scenario.

Question 1: Did I calculate Cohen's d correctly? Question 2: Does power of 0.05 using this function mean that power is non-existent?

Let's plot the data points you use. 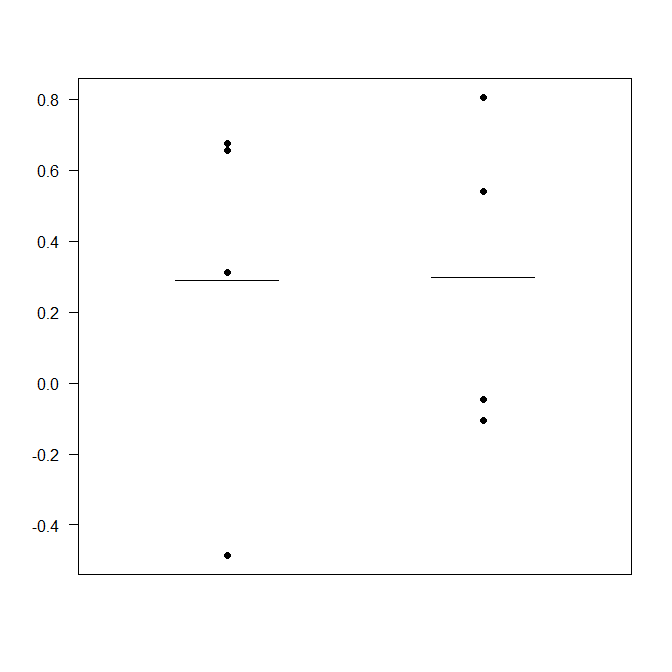 The horizontal lines give the group means.

Bottom line: it's good that you are thinking about your power before starting your study. Unfortunately, if your effects are truly this minuscule, you will not be able to detect them with a small sample.

Not the answer you're looking for? Browse other questions tagged t-test power or ask your own question.

5
Significant difference between proportions, found at sample size below that suggested by power analysis
0
Calculating the (mean) power of simulated linear regressions using pwr package in R
2
How to calculate the effect size for a t-test?
2
Significance Tests - Why Would a Low Sample Size Cause Problems?